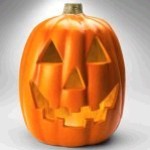 October 31, 2006, Greencastle, Ind. - "The books on this campus are haunted, rather than its beautiful buildings," Indiana's Rushville Republican writes of DePauw University in a story on "the state’s most haunted abodes and sites." Elizabeth Gist writes, "The ghost of James Whitcomb, governor of Indiana from 1843-1848, protects a collection of rare books that he donated to the library over 150 years ago. He left instructions that the Whitcomb Collection should never leave the library, and it became a 'threat' of sorts that anyone who did take a book home would be visited by Whitcomb’s ghost."

The Halloween column continues, "One student, who took a copy of

The Poems of Ossian to his room found himself awakened by Whitcomb’s figure at the foot of his bed. The specter pointed his finger at the terrified student and chanted 'Ossian! Who stole the Ossian?!' After the figure faded, the student stayed awake all night and waited until the library opened first thing in the morning to return the book. It is now virtually impossible for anyone to take books from the Whitcomb collection out of the building, but the legend of the ghost lives on."

Read the article, which includes a number of other Indiana "haunts," at the newspaper's Web site.