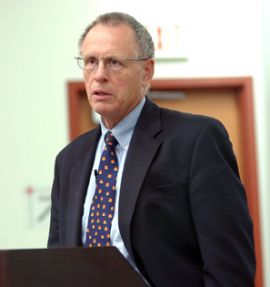 "To forgive means to be merciful, to pardon an offense or an offender, to give up a claim against another individual, to set aside a debt, to relinquish anger or resentment however justifiable those feeling may be, to free a person from the burden of guilt," Roth told his audience. "Thus, forgiveness is what we may call afterward. It has that status partly because of the holocaust and other human catastrophes."

After Dr. Roth's lecture, Wabash professor of religion Jonathan Baer stated, "I think when you bring people of this stature and this level of expertise on important matters like the holocaust and challenging issues like forgiveness, I think we are all prodded in our thinking. I think we are pushed to consider at a deeper level things that we might not have thought through so clearly." 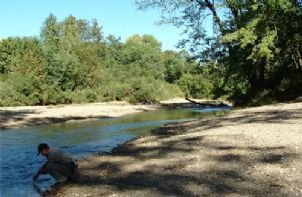 A summary of the presentation is available at Wabash's Web site.

Named the 1988 U.S. National Professor of the Year by the Council for Advancement and Support of Education (CASE) and the Carnegie Foundation for the Advancement of Teaching, John Roth is the Edward J. Sexton Professor of Philosophy at Claremont McKenna College, where he is the founding director of the Center for the Study of the Holocaust, Genocide, and Human Rights. He also serves on the faculty of Claremont Graduate University. Learn more by clicking here.