Prof. Bill Cavanaugh Makes a Case for Poetry and the Written Word 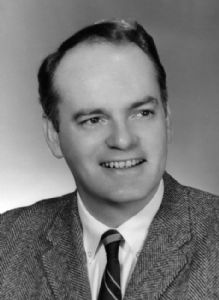 December 20, 1978, Greencastle, Ind. — College professors are teaching a generation of students culturally conditioned more by television than anything else, but a DePauw University educator says he sees an increasing number of students who want to enjoy and understand the written word. Professor William C. Cavanaugh, a professor of English at DePauw since 1965 and an award-winning poet, believes students are becoming more interested in literature because they don't want to be left out of important intellectual and pleasurable experiences.

"What I have been noticing is that students at DePauw want to be able to enjoy and understand literature quite apart from any practical purpose," Dr. Cavanaugh says. "They feel great pressure to advance quickly, but they must learn, at times, to slow down."

Cavanaugh says he's working to counter an increasingly technological society in which written language is viewed as a "throwaway container." He declares, "Most American students have been racing the clock. They know there's too much to learn and too little time. They have been measured for speed and comprehension. They have had to learn how to outline and skim profitably. They have not felt a need to get involved with language as an art."

The professor says that most students have "a facile comfort with visual experience and a parallel dimming of the sensitivity to sound. I suspect that in our experience with films and TV, Americans have been forced to speed up our intake of visual experience. We have to follow along at the speed of the pictures for better or for worse. The pressure to race our eyes over printed matter, never slowing down to pronounce syllables or to take much note of structure, seems to be a necessary trade-off for busy people."

Cavanaugh also observes, "We have had to develop new languages and memory banks for our computers, for there is simply too much information to remember. And we have invented shredding machines, for it may even be dangerous to remember."

Lamenting the fact that not one of the top 20 best sellers in any year of this century has been a book of verse, Cavanaugh says, "As I see it, my main work is not to spoon-feed students or to usher them through the labyrinth of 'difficult' poems, but to help them recognize the continuity of creative energy. The best students are skeptical of the idea that teachers naturally know what is best for them. Nothing will make them resist more than to say, 'Now open wide; here comes some wonderful Wordsworth. They suspect 'canned' culture. They do not honor the notion that a little poetry, some exposure to classical music, and a hurried trip through the Art Center will help their intellectual growth."

He concludes, "I doubt that any English teacher believes colleges can mass produce sensitivity poetry. But we do tend to think that any intelligent student's awareness to the power of words can be heightened by the close analysis of the most compressed and deliberate use of language: poetry."

Read more about Professor Cavanaugh in this previous story.