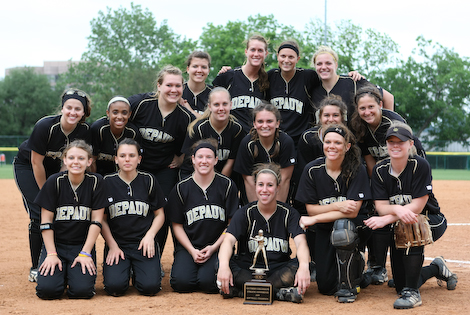 Rhodes' Kelli Zomer led off the game with a triple, but was stranded at third and the Lynx didn't get another base hit the rest of the game.

DePauw scored its first two runs in the opening inning as Chelsy Patterson led off with a triple and scored on Emma Minx's double. Rachel Gill followed with a run-scoring double.

Kelly Schwerzler led off the fourth by reaching on an error before Carolyn Bartlett's sacrifice bunt was mishandled putting runners on second and third. Brianne Weeks then delivered a two-out infield single scoring Schwerzler. Bartlett also scored on the throw to make it 4-0.

The Tigers wrapped up the game in the fifth as Bartlett singled with the bases loaded scoring Jen Kosinski and pinch-runner Cymone Allen and went to second on an error. Patterson drew a walk to load the bases again before Weeks  reached on a fielder's choice following an error on the play at second.

Megan Soultz improved to 23-7 with the one-hit shutout which was the 33rd shutout of her career as she struck out four and walked three. Soultz extended her streak of not allowing an earned run to 31 2/3 innings this year and has now pitched 32 2/3 straight innings in the SCAC tournament without allowing an earned run. Sara Bowen dropped to 12-5 with the loss.

With the championship, the Tigers earned the SCAC's automatic qualification into the NCAA Division III Championship. Pairings will be announced either Sunday, May 3 or Monday, May 4.

Earlier in the spring, DePauw was selected as one of eight first-round hosts. Tournament play begins on Thursday, May 7. The Tigers will be making their third straight NCAA appearance after finishing fifth in 2007 and advancing to the first-round final game last year.