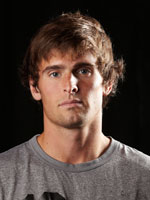 Sorg, "one of the league's better one-on-one defenders, was the Tigers' leading scorer this season despite playing 90 percent of the time as the team's center back," notes the announcement. "The SCAC Defensive Player of the Week in Week 5 and a two-time all-SCAC selection, Sorg had six goals and four assists for 14 points this season. Llobet and Sorg both received five votes to share the SCAC Defensive POTY honor. Ian Evans of Hendrix College received the remaining two votes." Sorg was also an All-SCAC First Team selection.