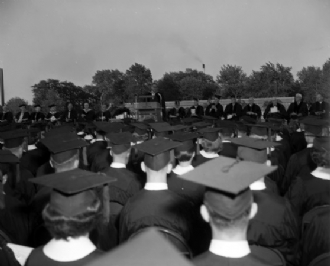 "The atom is being harnessed for peace; colonialism is everywhere coming to an end and a better life for people around the globe begins to assume concrete form," Bunche told the assembled crowd.

An Indianapolis Star summary notes, "He warned that the future of the world would be bleak if there were to be a third world war, the indescribable nuclear war, but added that 'world nuclear war is in no sense inevitable.' "

Bunche told the graduates and their families, as well as the faculty members assembled at DePauw's football stadium, "I personally find it inconceivable that the leaders of any nation would be so foolhardy as to ignite the fuse of atomic war." (at right: Dr. Bunche and President Humbert compare notes)

He sees a new era emerging in which the system of colonialism will become insignificant, creating a freer and more secure world.

The UN official, one of America's top black leaders, also believes much progress is being made in the area of race relations.  While much still needs to be done to free people from "the humiliation, disability and degradation of racial discrimination," Bunche sees change, and "the progress has been gratifying."

DePauw President Russell J. Humbert told the new graduates, "We counsel you to live beyond your dreams where, in humility, you will accept new and better ideas and ideals."  The students' four years at DePauw have given them intangible talents 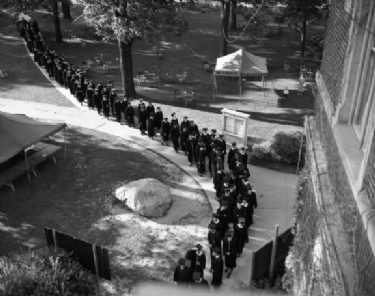 "which lie hidden in your soul, making you a restless, curious person.  We have confidence in your ability to develop spiritually and mentally, and we have high hopes for the realization of man's true social betterment."

Learn more about Dr. Bunche in this previous article.