August 10, 2011, Greencastle, Ind. — Page Cotton, Theodore M. Katula Director of Athletics at DePauw University and former head soccer coach, has been appointed a senior adviser to President Brian W. Casey, where he will lead efforts to raise funds for investments in DePauw’s athletics programs and facilities. Cotton will continue to oversee DePauw's athletic programs until the conclusion of a national search for a new athletics director.

"For more than 40 years, Page has been at the heart of DePauw’s athletic culture," notes Dr. Casey. "He has a track-record of winning and he possesses an extraordinary dedication to our students. As DePauw positions its athletic facilities and programs for success in a new conference, I can’t think of anyone else I would rather have leading these efforts." 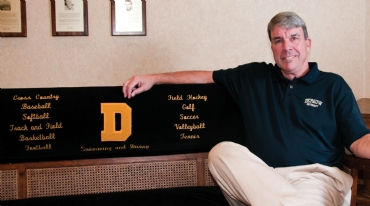 In Cotton's 15 years as the University's director of athletics, DePauw teams have won 94 conference team championships including 76 in the Southern Collegiate Athletic Conference. The Tigers won the SCAC President's Trophy (all-sports award) seven times in their 13 years in the conference including each of the last six.

On the national level, DePauw has placed in the top 40 of the Division III Directors' Cup standings nine times in the last 11 years with the highest finish of 13th coming in 2005-06. In all 15 years, the Tigers have finished as the highest ranked Indiana Division III institution. 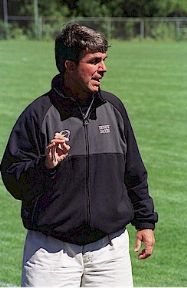 Cotton has overseen the hosting of nearly 30 NCAA Division III Championship events including three national championships. Athletic facility upgrades completed under his leadership include the Lilly Center fitness center expansion. the Blackstock Stadium renovations and the construction of the softball field, all in 1997, as well as the completion of the DePauw Indoor Tennis and Track Center in 2001.

A 1969 Springfield College graduate, Cotton came to DePauw as the men's soccer head coach and served in that capacity for 39 seasons before retiring at the conclusion of the 2007 season. He amassed a 390-190-33 record including .500 or better seasons in each of his final 26 years. 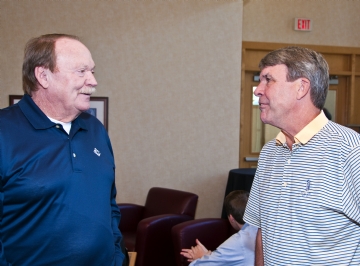 Cotton was inducted into the Indiana Soccer Hall of Fame in 2003 and chaired the NCAA Division III Soccer Championships committee. He has served on the NCAA Division III Membership Committee and is a member of the National Business Travel Association’s Sports Travel Task Force. (at right: former NFL great and HDNet announcer Paul Maguire chats with Coach Cotton on the eve of the 2010 Monon Bell Classic)