September 1, 2011, Greencastle, Ind. — Ian M. Rolland, the retired chairman of Lincoln National Corp. and 1955 graduate of DePauw University, is among eight individuals who comprise the third class of inductees to the Indiana Conservation Hall of Fame.  Rolland and the others will be inducted at a public event October 17 at the Indiana State Museum in Indianapolis.

"Rolland has been active in supporting land conservation statewide through the NRF, Indiana Heritage Trust and The Nature Conservancy," reports the Fort Wayne News-Sentinel. "He also had a key role in arranging for artifacts and archives from the former Lincoln Museum in Fort Wayne to go to the Allen County Public Library and Indiana State Museum."

"I was very surprised," says Rolland, who serves DePauw as a life trustee and is the former chair of the board.  "It’s certainly flattering. It’s an important honor and there are a lot of people 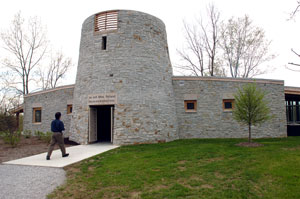 out there that I’m sure deserve to be recognized, so it’s flattering to be inducted."

In July, Rolland was presented with the Council for Advancement and Support of Education (CASE) 2011 Distinguished Friend of Education Award. It's covered in this article.