Each floor has a lounge kitchenette and TV in the "knuckle," with smaller lounge/study spaces in each wing. 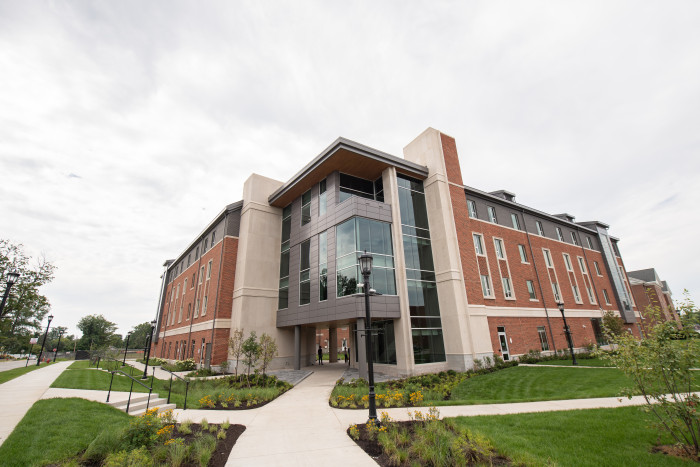 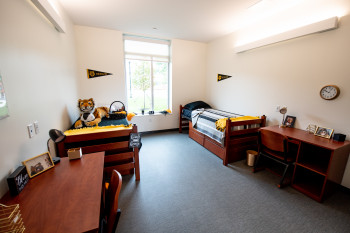 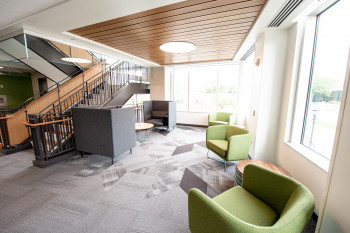 The Buehler Health and Wellness Suites is located in the Lilly Center for Physical Education and Recreation.  It was completed in April 2020 and offers individual exam rooms, therapy and training offices, group counseling spaces and educational programming spaces, while prioritizing client privacy and confidentiality. 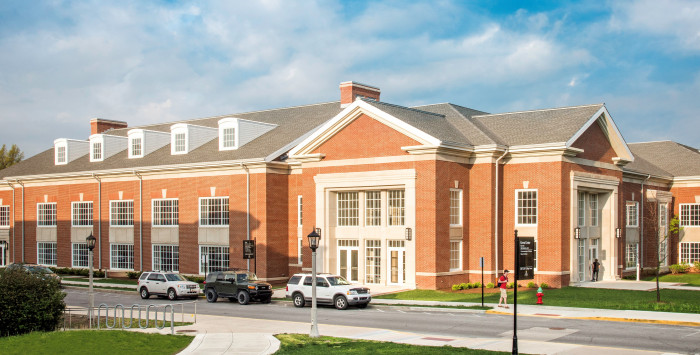 The Ullem Campus Farm and Center for Sustainability was completed and dedicated in May of 2019.

The DePauw Campus Farm was founded in 2013 on a one-acre property adjacent to the Prindle Institute for Ethics with financial support from several alumni and friends. Leadership from DePauw’s Office of Sustainability, partnership with Bon Appétit Management Company and hundreds of student volunteers grew the farm into a thriving operation, harvesting more than 6,000 pounds of vegetables and fruits annually for campus dining and local hunger-relief charities from 2013-2016. In 2017, Scott and Beth Ullem made a gift to move the campus farm to a 12-acre location adjacent to the Indoor Tennis and Track Center with easier access to campus and room to expand. The Ullem Campus Farm and Center for Sustainability will: 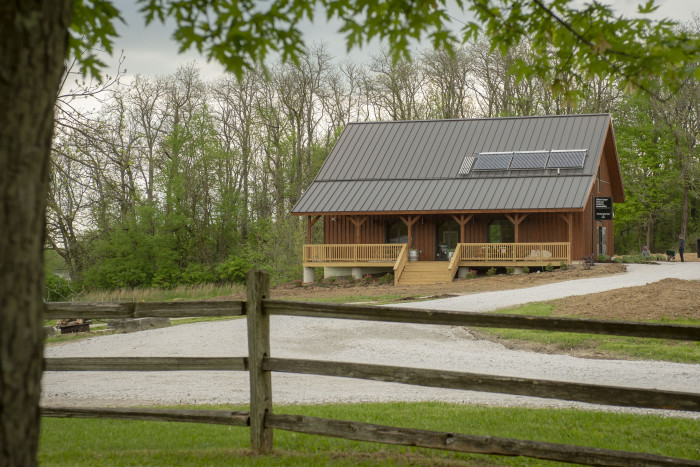 Charter House was demolished prior to the 2018-19 Academic Year, after the Development and Alumni Engagement staff have moved to the Bottoms Center. The space has been replaced by Faculty and Staff parking. 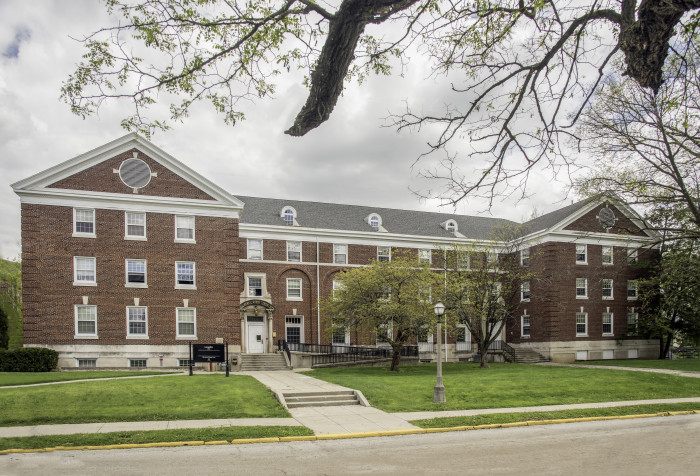 During Summer 2018, many of the residence halls received updates to space, including:

The Bottoms Alumni and Development CENTER 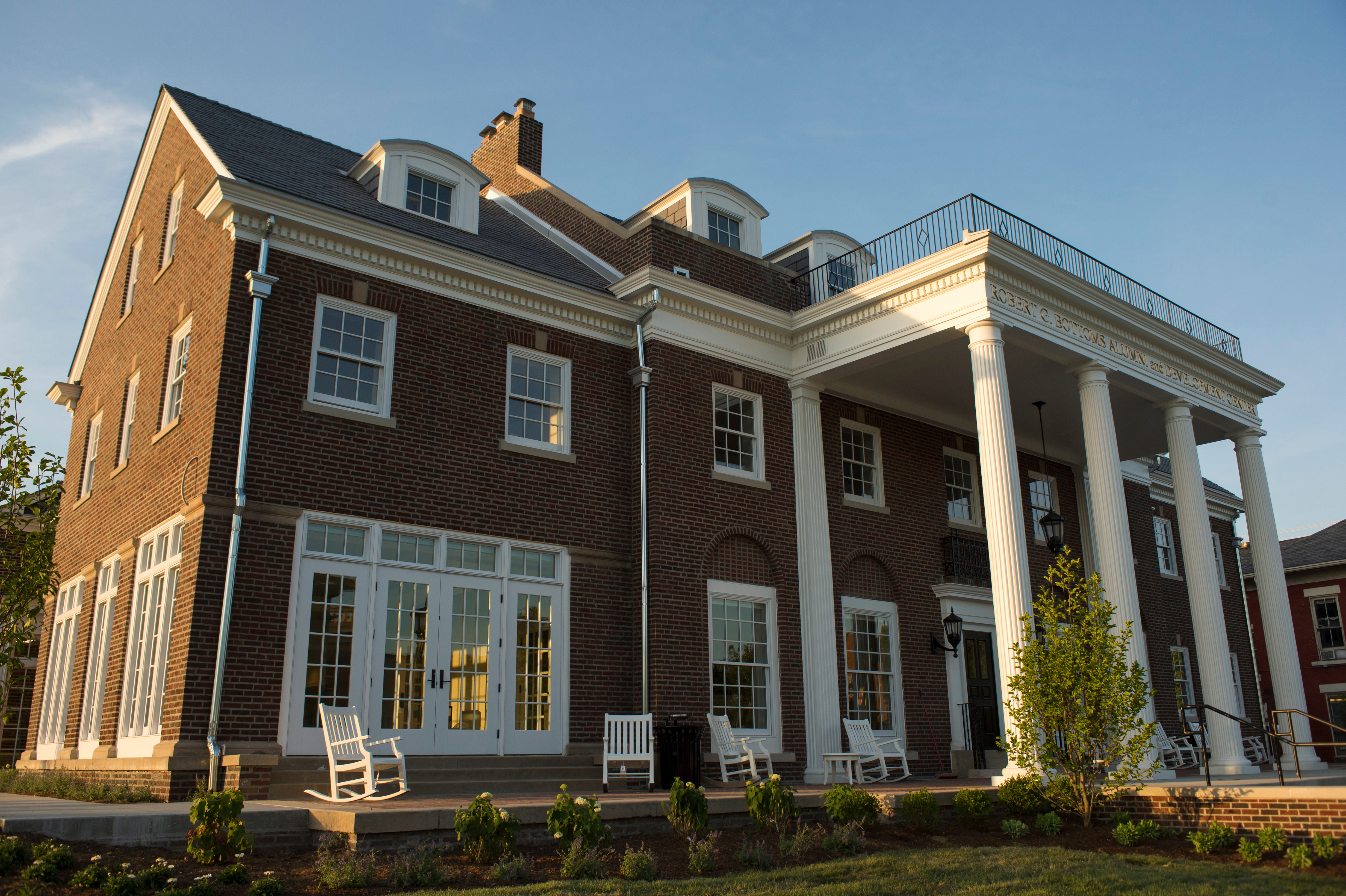 The Robert G. Bottoms Alumni and Development Center, positioned at 201 East Seminary Street across from Admission, creates a central University office space for the offices of Alumni Engagement and Development. The building formerly housed Sigma Nu fraternity and later, Delta Zeta sorority. The space provides a welcome center for alumni visitors and allows for programming and events. This project was made possible by the generosity of Tim and Sharon Ubben '58.

CeNTER FOR DIVERSITY AND INCLUSION 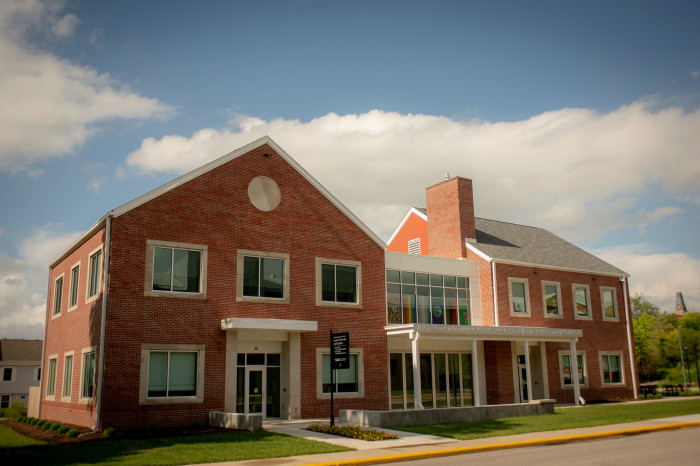 The Center for Diversity and Inclusion, positioned across Hanna street from Peeler Art Center, creates a central University gathering space for The Association of African American Students (AAAS) and The Dorothy Brown Cultural Resource Center in which students, faculty, staff and visitors will be able to attend or engage in programmed events. There is also administrative office space for Multicultural Student Services. This project was made possible by the generosity of Justin and Darrianne Christian ('95). 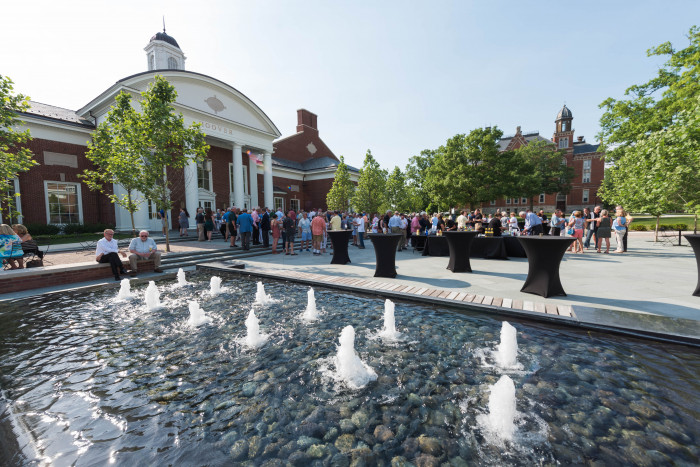 Stewart Plaza, positioned between Hoover Hall and the Union Building creates a central University gathering space in which students, faculty, staff and visitors will be able to attend or engage in programmed events. This project highlights a space entailing both hard and soft landscaping creating an aesthetic connection to Bowman Park.  New amenities such as lighting and outdoor seating complement the Georgian architecture of Hoover Hall and the Memorial Student Union Building and provide a centralized walkway to the historic core of the campus. This project was made possible by the generosity of Jim G. Stewart ('64). 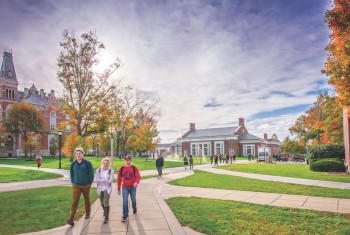 Initial efforts in support of this project were funded through a gift from Doug '85 and Ann Smith. The project included renewal of the entire lawn area stretching from Holton Memorial Quadrangle in the west to Locust Street in the east, and from Seminary Street on the north to Hannah Street on the south.

Hoover Hall fulfills a core element of the transformation of the campus core into a place of greater connection, contemplation, and creativity. A gift from Dave and Suzanne Hoover (both '67) provided a large portion of the funds necessary for the hall's construction.

Hoover Hall will replace the current “Hub,” a food- court-style dining hall that was originally intended to serve 350 students and now must accommodate more than 1,000 DePauw students daily. The new hall will serve as the primary dining space for first- year students and upper-class students living in University housing. 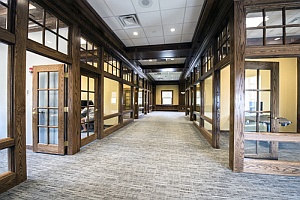 With the support of a gift from Al and Kathy '74 Hubbard, DePauw's Memorial Student Union Building was renovated to provide a new home for the Kathryn F. Hubbard Center for Student Engagement. The new Center is one of the first of its kind at a leading national liberal arts college and represents the University’s fundamental commitment to ensuring that every student is advised and supported in each of the three primary components of their student experience: academic life, student life and cocurricular life. 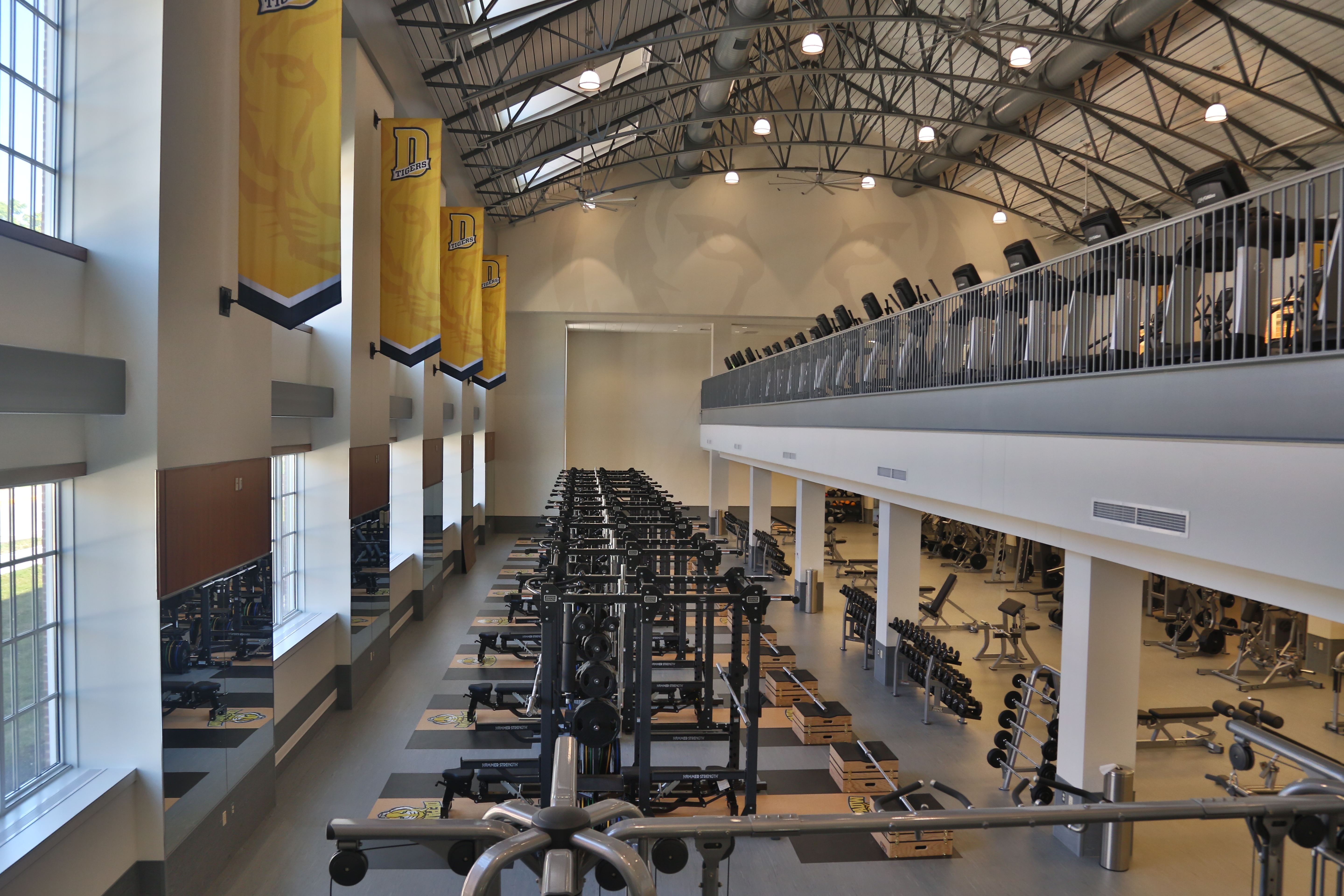 A new 16,000 square-foot, two-story fitness center provides the primary training facility for each of DePauw's varsity teams and for the campus community.  The new facility, the Welch Fitness Center, more than triples the size of the previous fitness center.  With the increased footprint, the facility provides a venue fully capable of accommodating DePauw’s integrated training model—the University’s preferred approach—in which student-athletes train alongside non-athlete students.

To accommodate future enhancements to the Lilly Center, the roof of the pool was raised and replaced. Where the current roof sloped towards the east, the new, two-story, roof makes it possible for the existing natatorium to be converted to a practice gymnasium upon the future construction of a new 50-meter pool in Phase Three.

The renovation of space previously occupied by underutilized racquetball courts more than doubled the office and laboratory space currently available for the Department of Kinesiology, a department that had struggled to accommodate a significant increase in the number of majors, particularly given the discipline’s heavy research focus. New recreational locker rooms were constructed within existing space vacated by the Kinesiology Department.

The expansion of the Lilly Center enabled expansion of spaces used for administrative activities, such as team meetings. Office spaces were also renovated. 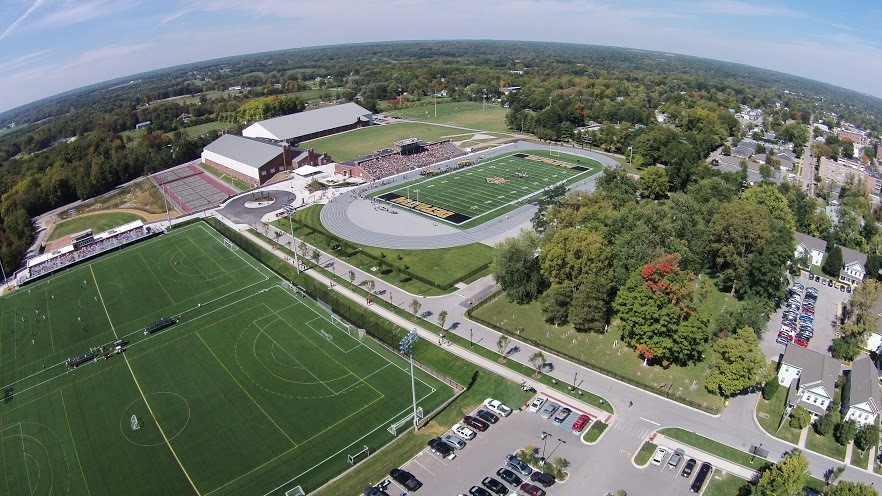 Phase one of the Athletics and Recreation Facilities Master Plan consisted of multiple enhancements entailing both rejuvenation and new additions.  At Blackstock Stadium, synthetic turf was installed to provide a more suitable consistent playable surface on the Nick Mourouzis Field.  The installation of a synthetic surface at Blackstock Stadium necessitated the construction of new track and field facilities. A new facility for these events (javelin, hammer, discus and shot put) was constructed just west of the railroad tracks on the western edge of the athletic campus. Additionally, due to the width of the synthetic surface at Blackstock Stadium, runs and jumps are located on space made available by the demolition of the visitor’s stands. (During the football season, temporary bleachers will be erected.) 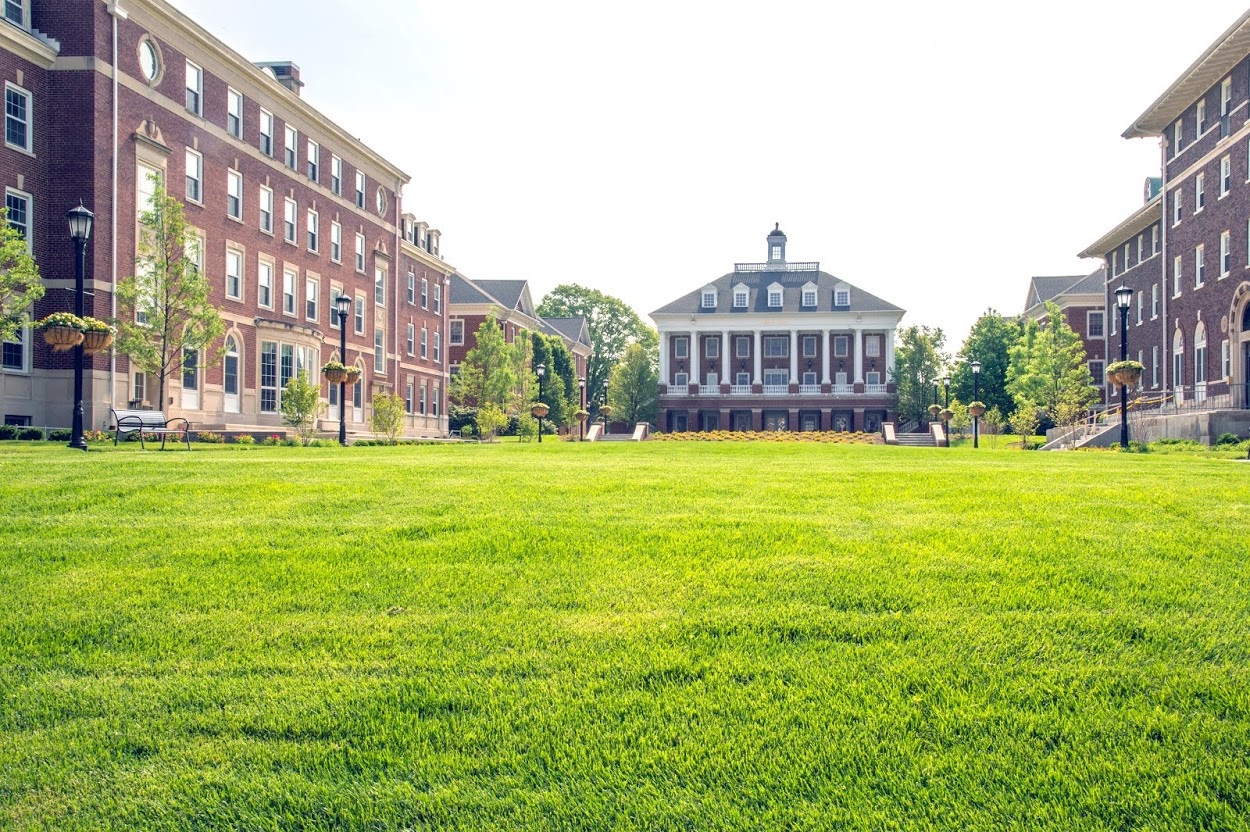 The Ubben Quadrangle landscape renovation project, began as an idea in June of 2013.  Tim and Sharon Ubben (both ‘58) provided a generous gift to the University in order to restore the residential community once called the North Quad.  The area between Mason Hall and Lucy Rowland Hall was renovated with new utility infrastructure, sidewalks, trees, plant materials, lighting and lawn area.  The porches on both Mason and Lucy were restored with new limestone and clay brick pavers and the Reese Hall facade was illuminated to enhance the quad at night.  The addition of many annual flowers, lots of flowering trees and shrubs and a Christmas tree for the holiday season provides a stronger and more inviting residential quality for the residents of Ubben Quadrangle. 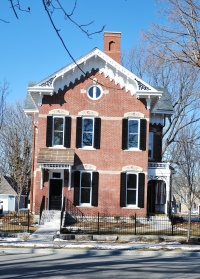 Welcoming students, faculty, staff and visitors as they enter the campus on Anderson Street are three residences that have been transformed. This restoration process was made possible by a $1 million gift from Jane L. Emison.  The project, deemed Emison University Residences, features a full restoration of the property at 429 Anderson Street and modest restorations including exterior renovations and interior furnishings at 427 and 431 Anderson Street.

The original construction of 429 Anderson Street commenced in 1887 by John Ireland, part of the local planning mill. To assist in the preservation of the residence, the University refinished the wood flooring and wood work throughout.  Other components consist of modern appliances, a kitchen with catering capabilities, two additional suites on the second floor and a new slate roof. 429 Anderson Street is being utilized by the University as housing for special guests and a place for small gatherings and events. The two additional residences are used for student and faculty residences. 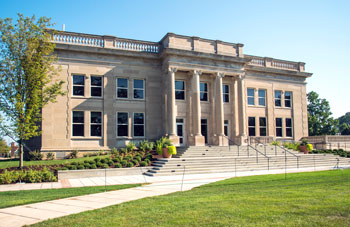 The Emison Building is now home to the University's Office of Admission and Financial Aid.  The renovated building provides a first floor reception area for prospective student visitors, with campus tours departing onto East College lawn from the building's north steps. While the reception area on the first floor re-opened in the fall of 2011, the second floor of the building was completed in summer 2012.  It now provides office space for the admission and financial aid staff.  Photographs of the reception area of the Emison Building are available in the University's photo database. 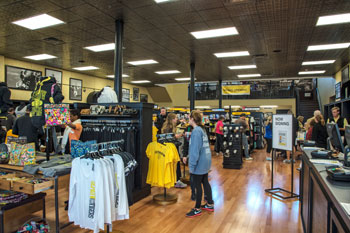 The Eli's Books and Starbucks Cafe project was also part of the Stellar Communities Initiative.  Initially proposed as a means of creating a high-traffic commercial and retail anchor on the square, the University offered to move its bookstore from the Memorial Student Union Building to the corner of Indiana Street and Washington Street on Greencastle's courthouse square.  In addition to providing new commercial spaces, the property includes an open-to-the-public community meeting room and four loft-style apartments.

The new bookstore is named in honor of Colonel Eli Lilly, who attended the Academy at Indiana Asbury (which would become DePauw University) and opened his first pharmacy in downtown Greencastle. The Follett Higher Education Group operates both Eli's Books and Starbucks. 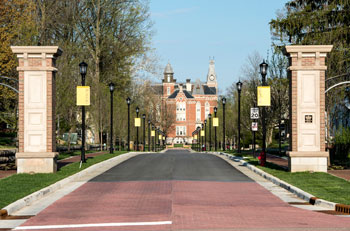 The Campus Master Plan, endorsed by the Board of Trustees in October of 2010, called for a new official entrance to campus.  Shortly after the plan's endorsement, the University partnered with the City of Greencastle on its Stellar Communities Initiative and the University-financed Anderson Street Project was included in the grant application.  By including the project in the application, the University's investments provided matching dollars that will make it possible for additional streetscape improvements to be made in the City's central business district.

Prior to the beginning of Anderson Street Construction in May of 2012, the street ran one-way, from west to east.  Upon the project's completion, Anderson Street now serves two-way traffic and features brick sidewalks, new limestone retaining walls, and new light posts. The Hoover Gates, named to honor R. David and Suzanne Hoover (both '67), sit at the corner of Anderson Street and Bloomington Street (Highway 231).  Photographs of the completed project, along with photographs documenting various stages of construction, are available in the University's photo database.