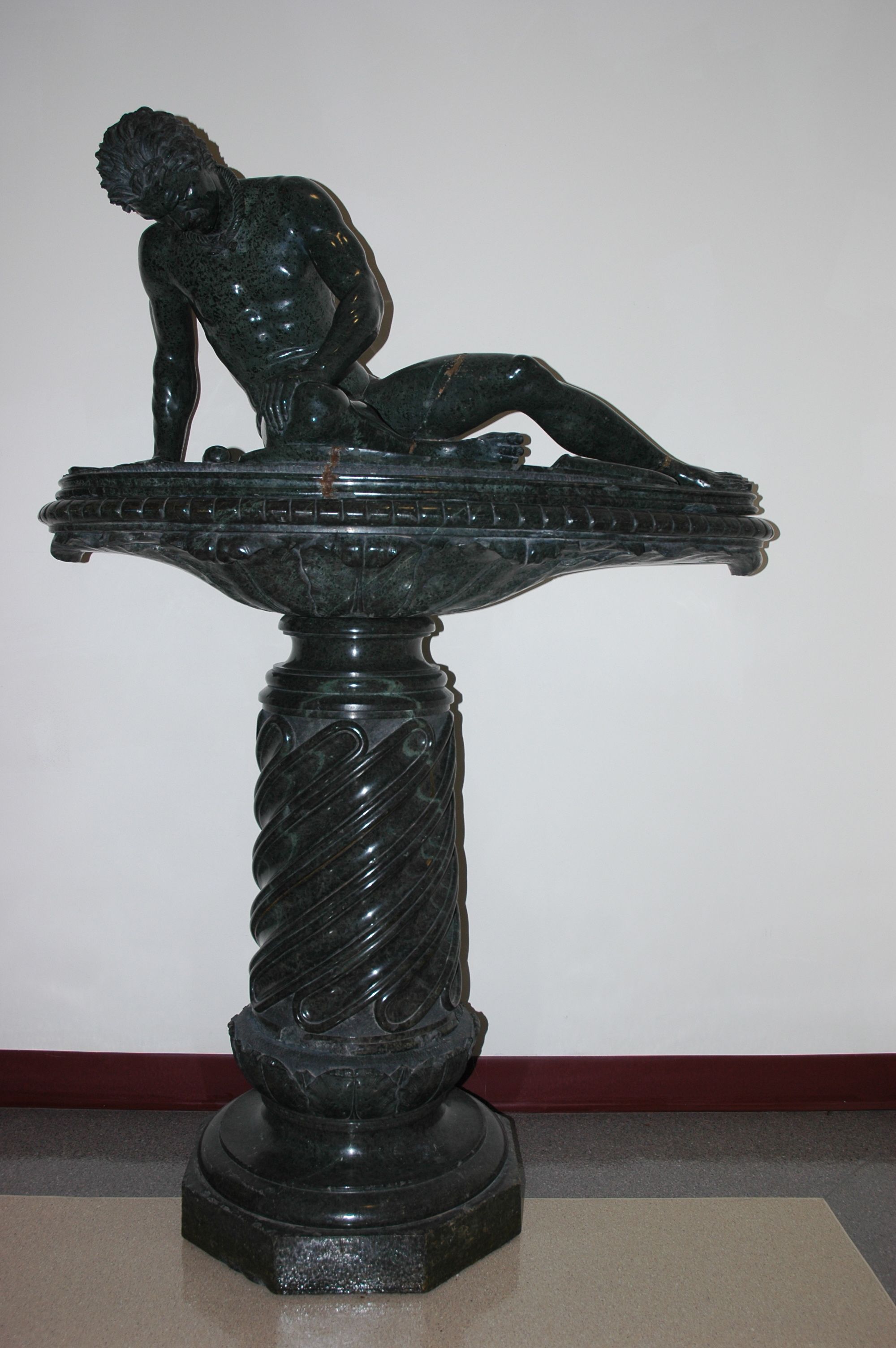 In 1885, Washington C. DePauw made a gift to the university of "several beautiful pieces of Italian marble statuary as the beginning of an art collection..." (Forty-Seventh Year-Book, p. 7). Included in the gift was a 19th century reproduction of the Dying Gaul, one of the most famous sculptures of Classical Antiquity. The DePauw version is carved in green serpentine marble and is approximately one-fourth life-size. It was probably made in Florence, Italy between 1860 and 1882. For many years the figure was on display in the Lilly Center. Unfortunately it was damaged at some point and put in storage. Recently, thanks to the Kairos Fund in the Department of Classical Studies, the Dying Gaul has been restored and is now on display in the Classical Studies Department on the first floor of Harrison Hall.

From Pergamon to Greencastle

The image of the Dying Gaul has been famous since it was first displayed in the city of Pergamon, on the west coast of ancient Turkey. The composition of the Dying Gaul consists of a wounded warrior propping up his fallen body with his right hand. Blood can be seen dripping from the wound in his right side. He is heroically nude, except for a torque around his neck that, along with his full head of hair and his mustache, serves to indicate that he is a Gaul. The fact that he does not have a full beard suggests that he is in fact a chieftan - an enemy leader. The Gaul has fallen on his oval shield, wrapped between his legs is his trumpet, and his sword lays by his right hand. The sculpture calls upon the viewer to witness the death of a noble warrior, and in doing so provokes us to empathize with the Gaul. Thus, the Dying Gaul commemorates a military victory, while acknowledging the cost of war. 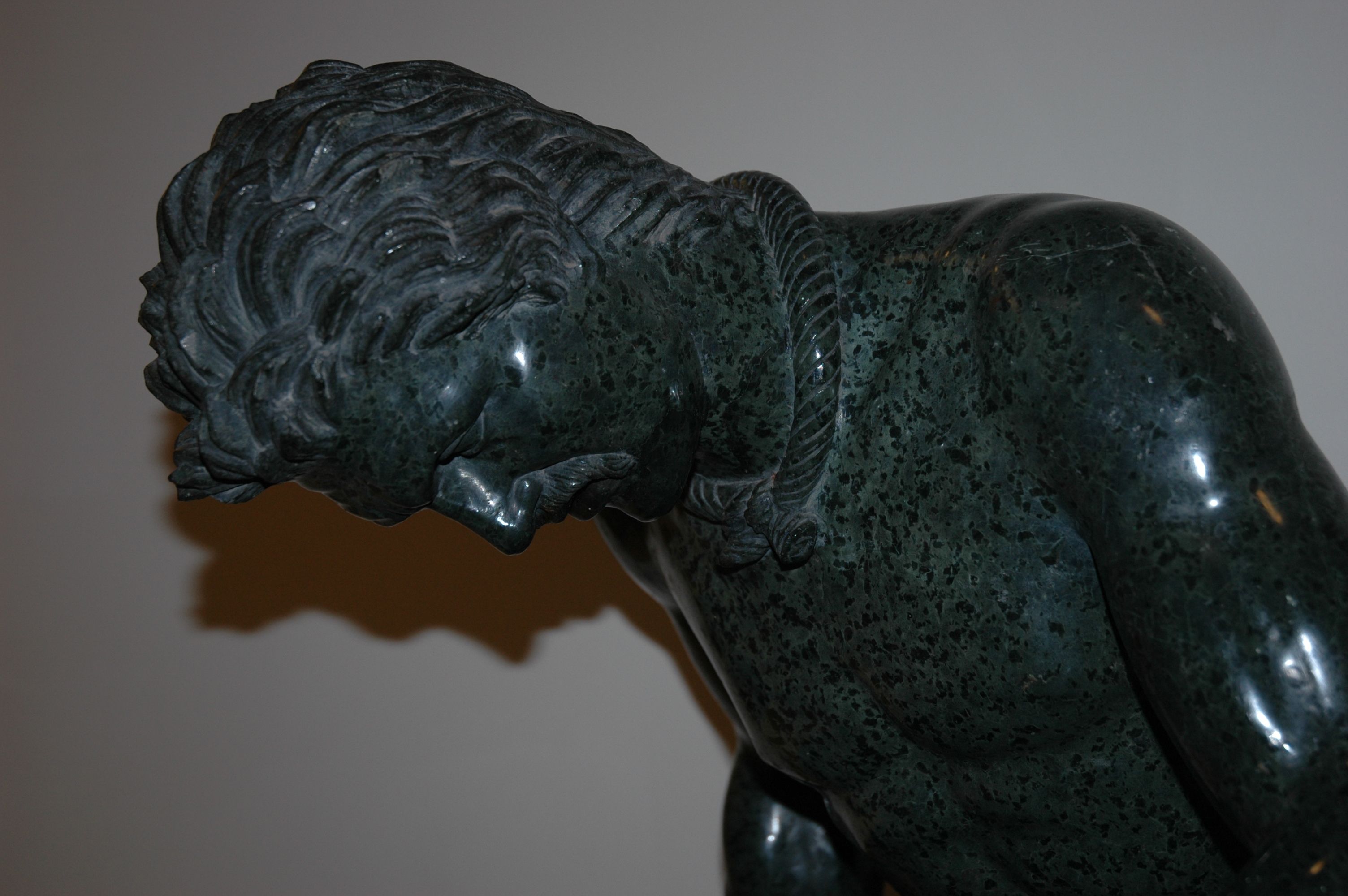 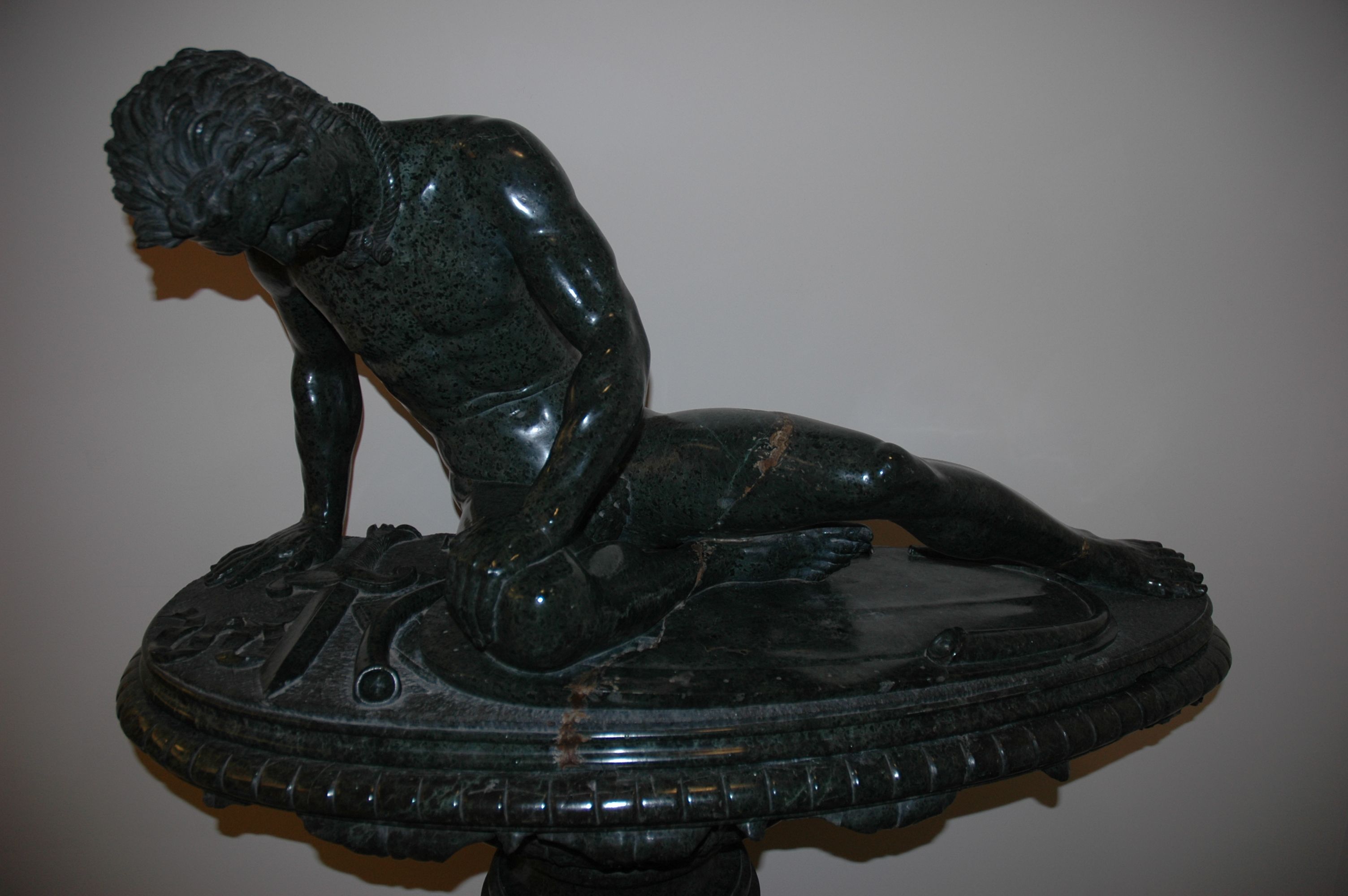 The original sculpture was executed in bronze and was one of several works commissioned by Attalos I of Pergamon to commemorate his victories over the Gauls between 230 and 220 BCE. The only evidence for the original Pergamene work is three statue bases excavated in the sanctuary of Athena at Pergamon. The Dying Gaul would have been positioned on one of those bases. Literary and epigraphic evidence may provide a little more information about the original work.

In his Natural History, Pliny the Elder (1st century CE) describes a "Trumpeter" made by the sculptor Epigonos (NH 34.19) The Pliny passage does not associate Epigonos with Pergamon. However, one of the statue bases found in the sanctuary of Athena at Pergamon bears this inscription: " King Attalos, Epigenes and the Officers and Soldiers, those who fought together in the battles against the Gauls and Antiochos [set up these] thank-offerings to Zeus and Athens, works of Epigonos" (Pollitt, p. 85). We do not know on which base the Dying Gaul was installed. Nevertheless, the reference in Pliny and the epigraphic evidence support the conclusion that Epigonos was responsible for this piece. 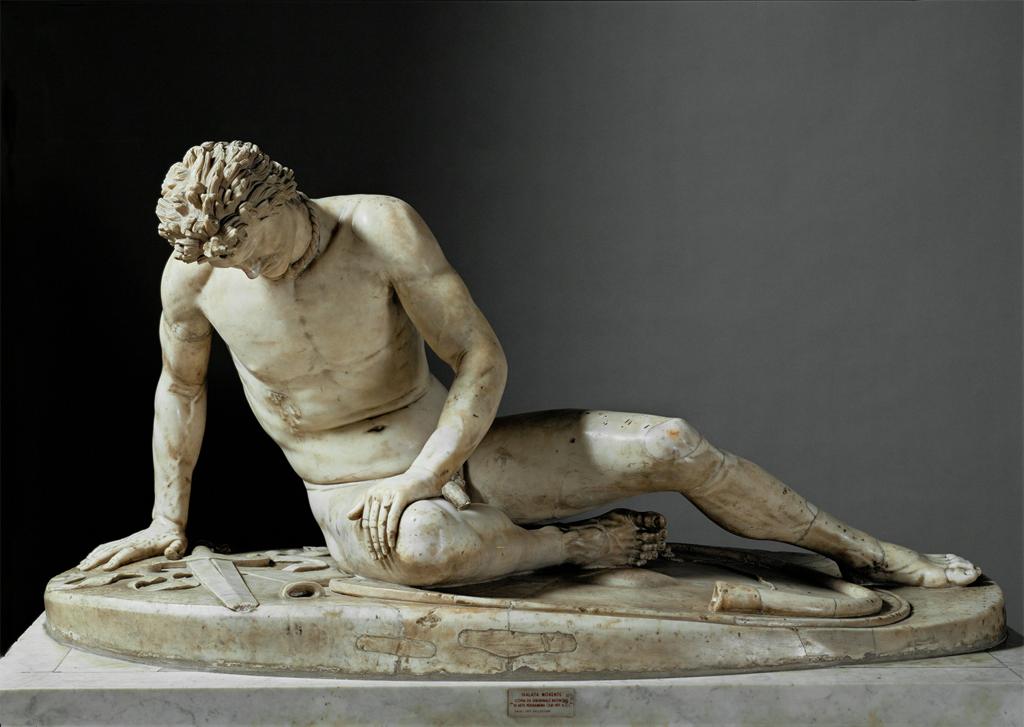 The Romans were intrigued by Greek sculpture (as evidenced by Pliny's catalog of Greek artists) and many Greek sculptures survive today only as Roman copies. It is not known exactly when the Roman marble copy of the Dying Gaul was made, who made it, or where it was displayed. The piece was rediscovered prior to 1623 on the grounds of the Ludovisi Villa in Rome. That villa sits on top of an ancient site known as the gardens of Sallust. It was originally identified as a Dying Gladiator, but the details of the figure in fact conform to ancient descriptions of Gauls (for example in Diodorus 5.28.1-3). Since the late 19th century he has been known as the Dying Gaul.

Throughout the 18th and 19th centuries, the Dying Gaul inspired hundreds of replicas in a variety of materials. The DePauw University version was likely made in Florence between 1860 and 1882. It is of green serpentine marble and includes a decorative pedestal (definitely a nineteenth-century addition to the composition). How it came into the possession of Washington C. DePauw is not entirely clear.

From the Forty-Fifth Year-Book of DePauw University, we know that in the late summer of 1881 Mr. DePauw travelled to Europe with his family. He began in London, where he attended a Methodist Ecumenical Conference, and then travelled to Egypt and Palestine. In June 1882, he was in Lucerne, Switzerland. The Year-Book records his journey only so far as it is relevant to correspondence between Mr. DePauw and the Board of Trustees, as 1881-1882 was when they negotiated the financial gift from Mr. DePauw that allowed the university to survive and resulted in its change of name.

It is not unreasonable to imagine that Mr. DePauw used the conference in London as an opportunity to take his family on a "Grand Tour" of Europe and the Mediterranean. For a wealthy American family in the late 19th century, this would have been a standard and even expected trip to make. British gentry had been making the trip since the 17th century and by the 1880's the itinerary was standardized and assisted by rail lines. From London, the DePauw family likely travelled to Paris and then to Lucerne. From Switzerland, travelers usually went on to Italy, where they would spend a few months in Florence, possibly Venice, and Rome. The more ambitious travelers would extend the journey to the eastern Mediterranean, including Egypt and Palestine.

It is likely that sometime between 1881 and 1882, Washington C. DePauw and his family were in Florence, where they may have acquired our copy of the Dying Gaul. By the late 19th century Florence had a vibrant art market in reproductions of antique sculpture. Copies of famous works were available in various sizes and materials. Indeed, by this time copying had literally become mechanical as most workshops used pointing machines and reducing machines to make accurate, if unremarkable replicas of ancient works. Such mechanical copies were produced for the general tourist, rather than the serious art collector, and were meant to decorate one's garden or conservatory. Given the quantity of replicas in various sizes and materials produced during this period, it is not surprising that we have no record of the specific workshop from which Mr. DePauw purchased the Dying Gaul. However the material may be a clue. The DePauw piece is made of a green serpentine marble, perhaps "marmo verde di Prato" from the Apennine hills. From the 1860's at least two Florentine manufacturers (Raffaello Romanelli and Antonio Frilli, both of whose workshops are still in business), were using this marble for replicas of ancient works (Haskell p. 123).

We do not know why Mr. DePauw chose to purchase this particular piece. Perhaps he was thinking of the university when he bought it. More likely, he - or his wife - wanted it as decoration for the DePauws' house in New Albany, Indiana. Whatever the reason, in 1885 Mr. DePauw donated the Dying Gaul to the university, along with another sculptural work, "Romeo and Juliet" by the artist Cesare Lapini. Lapini was active in Florence until his death in 1888. This is further evidence that Mr. DePauw and his family were in Florence during their European trip in 1881-2. Whatever his original intention in acquiring these sculptures, by 1885 Mr. DePauw had decided to donate them to the university. We are happy to now have the Dying Gaul on display in the Department of Classical Studies.