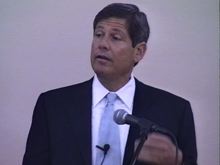 [DOWNLOAD AUDIO: "Make it Happen" 94KB] "The most important thing is, it starts with you," Jeff Smulyan told an capacity crowd of Management and Media Fellows in the Union Building Ballroom today at noon. "If you want it, if you believe in yourself, you can make it happen." "It" is building a business from scratch, and as CEO, chairman and president of Emmis Communications, Smulyan has first hand knowledge of what that takes. He presented the Robert C. McDermond Honorary Lecture, "What I've Learned About Being an Entrepreneur," and later this evening will present a keynote address at the first-ever Symposium for DePauw Entrepreneurs.

Jeff Smulyan says he never took a business course in college, and says that leads to a key piece of advice, that "entrepreneurs come from all places." Smulyan, who began with two radio stations and now oversees a publicly traded company that owns and operates 23 radio stations in the nation's largest markets as well as the number one radio network in Hungary. Emmis also owns 15 television stations in the United States, and its publishing division owns and produces a number of magazines.

Smulyan advised DePauw's students to devise a detailed business plan for a start-up, that if they do something they love they're more apt to be successful, and that in the end, success is measured by how you deal with failure.

[DOWNLOAD AUDIO: "Failure" 468KB] "While I hate to tell this to you, you will fail, and you will fail many times at many different things. I have never met anyone in my life who is successful who did not fail," Smulyan said.

The media magnate advised his young audience not to be afraid of taking what he called "reasonable risks"; to attempt to learn something new every day; to believe in something larger than themselves; to have a value system; and to surround themselves with the right team, delegate responsibilities and be willing to go through walls in defense of your staff. He recalled former NFL head coach Bum Phillips, 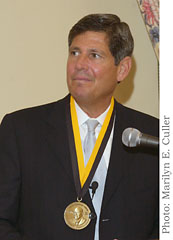 that probably made more sense about leadership than anything I've ever heard. They asked him to describe Don Shula (former head coach of the Miami Dolphins and Baltimore Colts), and Bum Phillips said, 'Don Shula can take his guys and beat your guys. And then he can take your guys and beat his guys.' Folks, that is the essence of leadership," Smulyan stated. "That really boils it down: a leader takes whatever he's got and makes the best of it and finds a way to succeed."

During his DePauw visit, Smulyan was presented with this year's Robert C. McDermond Medal for Excellence in Entrepreneurship. The first medal was presented Oct. 26, 2000, to Richard M. Schulze, founder, chairman and CEO of Best Buy.