November 5, 2001, Greencastle, Ind. - Drew Powell, a native of Lebanon, Indiana and a 1998 graduate of DePauw University, is riding high in a new TV prequel to the classic show Bonanza. Powell plays a teenaged Hoss Cartwright on the new PAX Network show The Ponderosa. Its premier episode commanded the highest ratings in the network's history, and has been praised by newspaper critics and TV Guide magazine.

"That's always nice to hear," Powell told the Zionsville (Indiana) Times Sentinel of the good reviews. "It's nice to hear from people back home," he said. "That's almost as much fun as anything else." 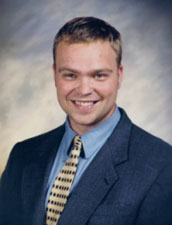 The newspaper article notes, "Powell went off to Hollywood after graduating from DePauw University in 1998." The young actor is no stranger to prime time. He was a recurring character in the FOX series Malcolm in the Middle, and has appeared in the WB Network's Popular and V.I.P. starring Pamela Anderson. He also landed leading roles in the independent films, My Education and Crusher.

You can read the Times Sentinel article in its entirety by clicking here. A PAX biography of Drew Powell, which mentions his degree from DePauw in English Literature, can be accessed here. Drew Powell was a Media Fellow at DePauw. The honors program also has an online profile of Powell, available here.