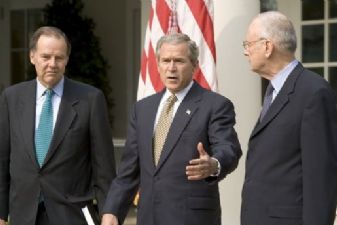 July 22, 2004, Greencastle, Ind. - Lee H. Hamilton, vice chairman of the 9/11 Commission and a 1952 graduate of DePauw University, "said after the September 11 attacks the government's efforts 'rightly included military action to topple the Taliban and pursue al-Qaida,'" reports the Associated Press. As the commission released its final report, Hamilton, a former congressman from Indiana, added, "But long-term success demands the use of all elements of national power: diplomacy, intelligence, covert action, law enforcement, economic policy, foreign aid, public diplomacy and homeland defense. If we favor one tool while neglecting others, we leave ourselves vulnerable." You can read more here. (photo shows, l-r, 9/11 Commission chair Tom Kean, President Bush and Lee Hamilton)

"President Bush praised as 'very constructive' the recommendations in a new report Thursday on intelligence failures that led to September 11, though his administration has reacted coolly toward a central proposal to establish a Cabinet-level national intelligence director," begins another AP story. It continues, "Thomas H. Kean, Republican chairman, and Lee H. Hamilton, Democratic vice chairman, formally handed a copy of the independent commission's report in a Rose Garden ceremony. Bush had fought the creation of the panel, resisted the release of documents and battled against letting national security adviser Condoleezza Rice address the panel. But he embraced its work Thursday." Read the entire article by clicking here.

As he received the report, President Bush said to Hamilton and Kean, "These two men bring a common-sense approach to how to move forward. They recognize what I recognize, and America recognizes, that there's still a threat, and that we in government have an obligation to do everything in our power to safeguard the American people. And the report that they are about to present to me puts out some very constructive recommendations. And I look forward to studying their recommendations, and look

forward to working with responsible parties within my administration to move forward on those recommendations. As well, we look forward to working with the Congress on the implementation of ways to do our duty. And the most important duty we have is the security of our fellow countrymen. So, thank you, men, for your service. I'm proud you're here. You did a wonderful job."

View another photo of Lee Hamilton at the White House today with President Bush and commission chairman Tom Kean here. Another photo of Hamilton and Kean, taken yesterday, can be seen here. Lee Hamilton will speak at DePauw on Friday, September 17, as part of "DePauw Discourse 2004: Issues for America," a three-day election issue forum hosted by the Washington C. DePauw Society. Learn more by clicking here.