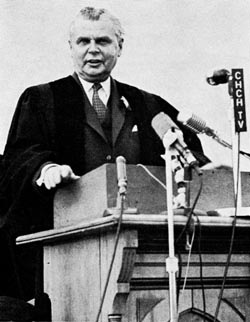 June 5, 1960, Greencastle, Ind. - "To each and every one of you, my best wishes," the Right Honourable John G. Diefenbaker, prime minister of Canada, said to DePauw University's Class of 1960. Speaking at the 121st commencement this afternoon, Diefenbaker wished DePauw's 414 graduates, "The best wishes of every American and every Canadian that you, in your day, will bring about the ideals of peace on Earth, goodwill to men, with justice and equality of opportunity, and denying discrimination everywhere in every part of the world." 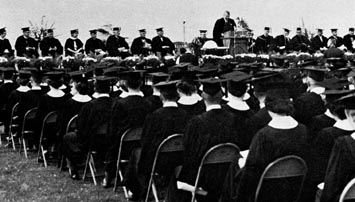 Diefenbaker called upon DePauw graduates to "make your contribution to the attainment of that world which we did not in two world wars achieve." He urged the young Americans to embrace and protect "Freedom, the right to search for truth, the right of men and women everywhere in the world to a measure of freedom, freedom from fear and freedom from want."

Following his address, DePauw conferred an honorary Doctor of Laws degree on the prime minister, the same honor British Prime Minister Harold Macmillan received when he delivered the speech at commencement exercises in 1958. (at left: DePauw President Russell J. Humbert with the distinguished guest)