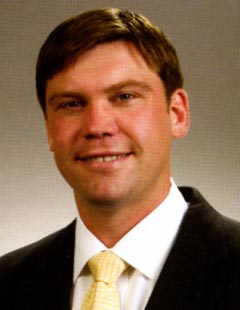 September 23, 2008, Greencastle, Ind. - Jason M. Lee, a 2002 graduate of DePauw University, has joined Lewis Wagner LLP in Indianapolis as an associate in the business and commercial transactions practice group. Lee concentrates his practice in business, commercial, and construction law and medical malpractice.

Lee received his J.D. from the Indiana University School of Law in 2006. 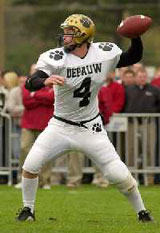 Jason Lee was the starting quarterback on the Tiger football team and played professionally after college in the German Football League. He holds a number of DePauw records, among them: passing yards in a season (3,034 in 2001); net offensive yardage in one game (462 vs. Hope, 9/16/2000); and passing attempts and completions in one season (459 and 256 in 2001).  He is second all-time in career passing yards (5,287) and third in career total offense yards (5,125).

See Jason Lee in action in these "Monon Memories":