April 24, 2010, Greencastle, Ind. — Mary (Martin) "Marty" Wyall, a 1943 graduate of DePauw University, has received the Congressional Gold Medal for her service to America as a WASP (Women Airforce Service Pilot) during World War II. "The medal, along with the Presidential Medal of Freedom, are the highest awards given to civilians by the U.S. government," reports the Fort Wayne News-Sentinel, which carries a story on Wyall's honor. "The top military award, the Congressional Medal of Honor, is presented for valor in action against an enemy force while serving in the U.S. armed services."

Kayleen Reusser reports that Wyall "graduated just two weeks before the program disbanded in 1944 ... The WASPs, whose first class graduated in 1942, helped the World War II effort on the home front by ferrying aircraft, testing planes, instructing male pilots and towing targets for anti-aircraft artillery practice. Among the 25,000 applicants, Wyall was one of 1,074 women accepted into the WASP program. The U.S. government finally recognized the efforts of those American women in 1977 when President Jimmy Carter signed a law stating WASPs could be recognized as veterans of World War II."

Wyall and about 175 other WASPs were awared Congressional Gold Medals at a March 10 ceremony in Washington. "Wyall, whose name was Mary Anna Martin at the time she was a WASP, attended the ceremony with 10 guests -- including her four children, three grandchildren and daughter-in-law."

Reusser writes, "Wyall grew up in Indianapolis and learned about the WASP program from a magazine article while a student at DePauw University in Greencastle, where she majored in bacteriology. The idea of being a pilot intrigued Wyall, and she felt compelled to get involved. 'There was a war on, and I wanted to help my country,' she said. In 1943, after graduating from college, Wyall left for training at Avenger Air Field in Sweetwater, Texas, where all of the WASPs trained. The WASP applicants were required to have 35 hours of flying before joining the program. While working in the serology lab at Eli Lilly, Wyall had paid for private flying lessons. By graduation from WASP training, she and the other women each had flown a 2,000-mile, cross-country solo flight. Since the WASPs had not yet been recognized by Congress as part of the military, the female recruits had to absorb the costs of their training, including transportation to Texas, room and board and uniforms. For the 38 who perished while serving as WASP pilots, their families and friends -- 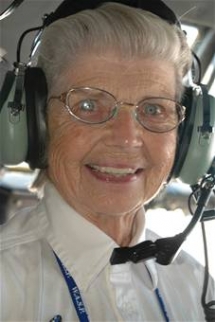 not the government -- paid funeral expenses. They couldn't be buried in a national cemetery or have a flag draped across the casket."

Wyall went on the a career as a private pilot.

The Indiana State Museum is honoring the legacy of the WASPs with an exhibition, "In Her Honor," which continues through August 8. It "features Wyall's personal belongings as well as her Congressional Gold Medal, which she donated to the museum."

You'll find the complete article -- "A pilot's quiet legacy: Marty Wyall of Fort Wayne flew in the WASPs, a trailblazing group of women in the U.S. military during WWII" -- at the News-Sentinel's website.