February 7, 1969, Greencastle, Ind. — For two weeks every semester, future DePauw University student-journalists will have the opportunity to work side-by-side with some of the nation's outstanding newspaper reporters, editors and managers.  The new program is being made possible by the $130,000 Kilgore Memorial Fund, which honors the legacy of Bernard Kilgore, a 1929 DePauw graduate who rose from a position as a reporter at the Wall Street Journal to become president of the board of the newspaper's parent, Dow Jones and Company.  (at left: Barney Kilgore; below right: committee members White, Curtis, McCormack and Miller meet with Niki Lee, current editor of The DePauw)

Kilgore, a member of DePauw's Board of Trustees who died in 1967, is credited with developing the Journal into the prominent national publication it remains today. 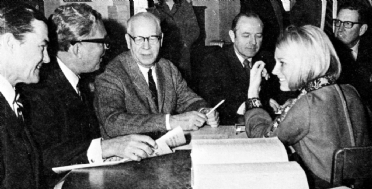 M. White II, publisher of the Ledger of Mexico, Missouri, are the committee's other members.

Beginning this fall, McCormack says the committee expects to designate the first Kilgore Counselor who will come to the DePauw campus for two weeks.  He says the counselor will work with students as they produce The DePauw student newspaper, bringing long professional experience on editorial matters as well as leading informal sessions on the principles of newspapering.

Some portions of the fund will also be used to support travel for student journalists and to maintain and enhance facilities in the Publications Building, where Kilgore worked as a student editor at DePauw.