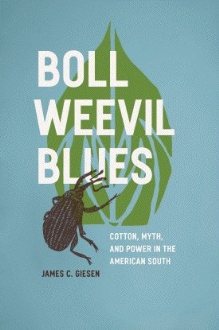 July 19, 2011, Greencastle, Ind. — James C. Giesen, assistant professor of history at Mississippi State University and 1995 graduate of DePauw University, has authored Boll Weevil Blues: Cotton, Myth, and Power in the American South. The book has just been published by University of Chicago Press.

"Between the 1890s and the early 1920s, the boll weevil slowly ate its way across the Cotton South from Texas to the Atlantic Ocean," notes a synopsis. "At the turn of the century, some Texas counties were reporting crop losses of over 70 percent, as were areas of Louisiana, Arkansas, and Mississippi. By the time the boll weevil reached the limits of the cotton belt, it had destroyed much of the region’s chief cash crop -- tens of billions of pounds of cotton, worth nearly a trillion dollars. As staggering as these numbers may seem, James C. Giesen demonstrates that it was the very idea of the boll weevil and the struggle over its meanings that most profoundly changed the South -- as different groups, from policymakers to blues singers, projected onto this natural disaster the consequences they feared and the outcomes they sought. Giesen asks how the myth of the boll weevil’s lasting impact helped obscure the real problems of the region -- those caused not by insects, but by landowning patterns, antiquated credit systems, white supremacist ideology, and declining soil fertility. Boll Weevil Blues brings together these cultural, environmental, and agricultural narratives in a novel and important way that allows us to reconsider the making of the modern American South."

In the book's acknowledgements, Dr. Giesen writes, "I first became interested in the rural South as a junior at DePauw University, in a class taught by John Dittmer.  John has been a helpful critic, unflagging supporter, and steadfast friend since then.  His teaching and scholarship are models for my own.  He is why I became a historian."

Jim Giesen's interests are the agricultural, rural, and environmental histories of the U.S., with a particular focus on the South in the twentieth century. A history major and basketball player at DePauw, he earned his M.A. at the University of North Carolina and the Ph.D. from the University of Georgia.

Dr. Giesen serves as director of the Center for the History of Agrculture, Science, and the Environment in the South (CHASES) and executive secretary of the Agricultural History Society.