Three was the magic number for the DePauw Debate Team this past weekend at the Indiana State Tournament hosted by Butler University.  Alex Spencer and Alayna Trier advanced to the semi-final round before dropping a closely contested 2-1 decision to Ball State.  They were named the Third Place NPDA team in the state.  Spencer also received additional recognition as the 3rd Place Speaker overall.  In IPDA debate, first year debater Matt Hatch achieved similar results and likewise made it to the semi-final round before also dropping to Ball State on a 2-1 decision.  Because of the top ten finishes of two other DePauw debate teams, Yong Heo and Sage Klinger, and Kristina Mikhailova and Damir Pupovic, the DePauw Debate Team received the 3rd Place Sweepstakes Award overall. 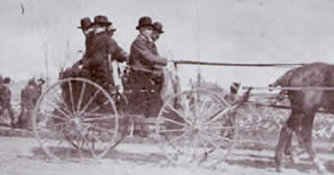 The DePauw Debate Team heads for the Vandalia station in April 1897 to take the train for a debate with Earlham College in Richmond, Indiana. One of the team members is historian Charles A. Beard.