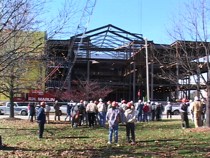 November 20, 2001, Greencastle, Ind. - A crowd gathered on College Avenue early this afternoon to witness what is literally a piece of DePauw University's future being hoisted into place. The final steel beam for the renovation of the Julian Science and Mathematics Center was ceremonially lifted into place by a huge crane just before 1 p.m.

[DOWNLOAD AUDIO: "The Final Beam" 196KB] “This represents the last piece of steel that's going up on the building, and that of course is very important to our goal of getting the entire building enclosed

by the end of the year,” said Fred Soster, chair of geology and geography and the DePauw faculty member overseeing the project.

Before the beam was hoisted into place, DePauw faculty, staff and students signed the inside of the bar to mark their participation in this latest chapter of DePauw's history. The steel was adorned with a Christmas tree, an American flag and a DePauw banner as it slowly ascended to its final destination atop the building. 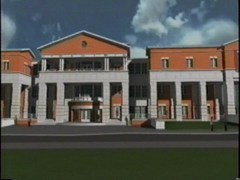 [DOWNLOAD AUDIO: "Progress Report" 249KB] “We are, as of today, pretty much on schedule,” Soster said of the overall project, which will “mean quite a lot. We slipped behind in October 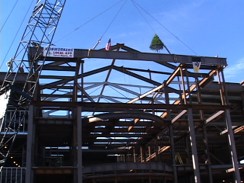 because it was unusually wet, but here in November we've has some nice, mild weather, so we've been able to catch up,” he reported.

The new Julian Center will house, among other things, state-of-the-art technology-enhanced classrooms and the hub of the eLearning initiative that was announced in March with a $20 million grant from Lilly Endowment,

[DOWNLOAD AUDIO: "What it Means" 521KB] “which will bring a lot to the University and our students,” Soster says. 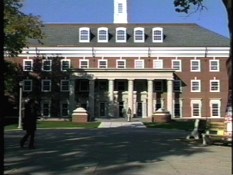 Work continues on a new building for the teaching of art. This summer crews gave Roy O. West Library (at left) a new look by adding columns and a pitched roof to the building, bringing it in line with the architectural style of neighboring Asbury and Harrison Halls.

To view a three-dimensional, animated architect's video rendering of what the new Julian Center will look like, click here: