November 27, 2001, Greencastle, Ind. - 1957 DePauw graduate Vernon E. Jordan Jr. continues to receive a great deal of attention for his recently published memoirs, Vernon Can Read!. Last night, the civil rights legend was the subject of a lengthy interview on the nationally-broadcast PBS' NewsHour with Jim Lehrer. Jordan makes several references to his alma mater in the interview, which can be accessed by clicking here (a RealPlayer is required).

Jordan, the former president of the National Urban League and an adviser to Presidents Clinton and Carter, delivered the Old Gold Convocation speech on the DePauw campus one month ago. He told the gathering, "Terrorism is not new to black people. But 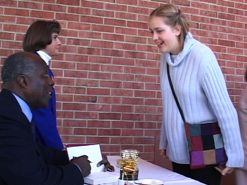 You can access an article that includes text, photos, video and audio from that address by clicking here.

Vernon Jordan's address to DePauw's Class of 1993 is embedded below.