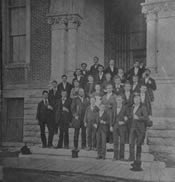 October 20, 1870, Greencastle, Ind. - "Citizens of Greencastle contributed sufficient funds to begin to construct a badly needed new building," notes DePauw: A Pictorial History. "The cornerstone for this structure, to be located in a large field east of the old campus, was laid on October 20, 1870." The building, which came to be known as East College, hosted commencement exercises in June 1874, and in September 1875 all college classes were moved to the building, according to DePauw Through the Years. But work on East College continued until 1882, when the building's basement was completed. East College was placed on the National Register of Historic Places in 1975. (photo: students posing on the building's steps in the 1870s)

"In these years the faculty had expanded to seven positions, including the president, who was also professor of mental and moral philosophy as well as Harmon Professor of Biblical Literature," states DePauw: A Pictorial History, written by emeritus professors of history Clifton Phillips and John Baughman, with assistance from professors Harold Spicer and John Schlotterbeck, as well as Wesley Wilson, coordinator of DePauw University's Archives.