There's a Double Dose of Friday the 13th in February and March, But Don't Worry 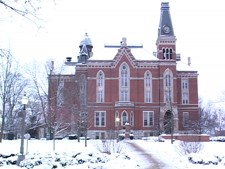 January 30, 1998, Greencastle, Ind. - Triskaidekaphobes be warned: You should be especially wary in the months of February and March this year. Superstitious people may want to avoid black cats, opening umbrellas inside of buildings, breaking mirrors, walking under ladders and other "bad luck" activities because the 1998 calendar provides back-to-back Friday the 13ths in those months. Triskaidekaphobia is the fear of the number 13.

People really should not be concerned about Friday the 13ths in consecutive months, according to Terri Bonebright, DePauw University assistant professor of psychology. She said people's fears about Friday the 13th are just another human superstition through which people try to find a reason for the causes and effects of daily life.

"It all revolves around superstition," Bonebright said. "In the case of Friday the 13th, many people have been told it will be a bad day, so they selectively remember all the bad events that occurred throughout the day. On the other hand, on a Monday the 9th, for example, something bad may happen, but people will not link that day to bad luck."

Throughout history people have wanted explanations for the events affecting them and their lives. According to Bonebright, superstition often provides a vehicle to rationalize unexplained events or circumstances for which the person is ultimately responsible. Bonebright cites the example of a student who takes a test and fails it. "If he or she sees a black cat or some other superstitious event before the test, he or she might say, `I flunked the test because I didn't wear my lucky hat.' The person should actually take responsibility for his or her actions and say, 'I flunked the test because I didn't study enough."'

Bonebright said she is amazed how superstition carries over to many other things in society. She said she recently stayed in a newly built hotel in Philadelphia without a 13th floor. "I was surprised to see that even in a newly constructed building there would not be a 13th floor," Bonebright said. "This association between the 13th floor and tragedy is not born out of reality."

Bonebright said most people who are superstitious of Friday the 13th do not have a serious problem, but she said if superstition rules a person's life, he or she should seek professional help.