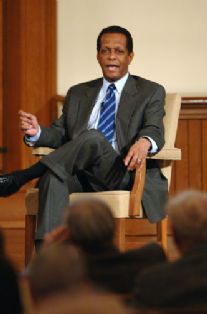 [Download Audio: "Moving Backwards" - 338kb] "Over the past few years I feel like we've been moving backwards," New York Times op-ed columnist Bob Herbert told an afternoon DePauw Discourse 2006 session today. "We didn't learn the lessons of Vietnam and now we're stuck in a tragic war in Iraq. Instead of the standard of living improving, people are really worried," Herbert reported to a crowd gathered in Meharry Hall of historic East College.

Over the past few days, Herbert has been talking with voters in Indiana. "People are really feeling insecure economically, they feel that the country is going in the wrong direction. The country is more polarized than I've seen it politically at any time in my lifetime. And people are wondering -- I think certainly for the first time in my lifetime, maybe for the first time in American history -- whether their sons and daughters will actually lead a better life economically and in other ways than the parents will. And I think these are things that we all should be concerned about." 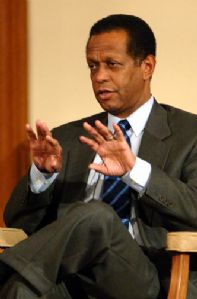 The columnist recalled growing up in New Jersey as the son of an upholsterer in a world that, sixty years ago, held the promise of better times to come.

[Download Audio: "Go-Go Attitude" - 307kb] "In the immediate post-war period there was this go-go attitude in the United States. There was this feeling that if the country could pull together, to some extent, that you could achieve wondrous things, and I think wondrous things were achieved," Herbert asserted. He noted the Marshall Plan, improvements in the nation's standard of living, the civil rights and women's movements, among other events.

Shouting pundits on both sides of the political aisle who dominate the talk shows, and poor media coverage of the governance of America and the war have contributed to the divisive state of the nation today, Herbert says.

[Download Audio: "The Feeling Across America" - 254kb] But "more important than the coverage is this sense among thoughtful Americans, voters, that they really can't affect events; that voting is becoming less important in their minds." The Times' scribe says trends he's reading about and the people he's interviewing indicate, "That people believe that when they go into the voting booths, to a great degree, their vote doesn't matter, that events are just going to go this way or that way depending on whoever is in power and what they want. And I think that's extremely 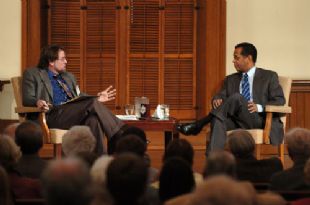 [Download Audio: "Leadership" - 333kb] "an absolute lack of strong, responsible leadership in this country for several years. And part of the irony, it seems to me, is it's been the baby boomer leadership that has fallen short, as far as I'm concerned. I think that's really the fundamental thing that is missing now; that the country is hungry for strong, responsible, mature, wise leadership."

The award-winning writer says the excitement that Barack Obama is generating is a reflection of the void he sees. The freshman U.S. Senator from Illinois is

[Download Audio: "On Barack Obama" - 192kb] "a candidate very few people know anything about other than the fact that he is an attractive candidate, very appealing, intelligent, seems to be thoughtful and says that he wants to reach across the divide to people who may not agree with him politically," Herbert says. "I think the fact there's been such a groundswell of support for him in such a short period

of time is testimony to the fact that there is a tremendous lack of leadership in this country right now."

With election day a week and a half away, Herbert sees frustration with Republicans, but little evidence that Democrats are really connecting with voters, because, he says, they're not offering any plans for what they'd do differently. He calls chances "good" that Democrats will gain 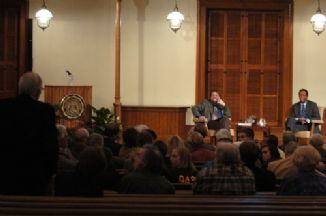 control of the House of Representatives, but taking the Senate will be "problematic" and not likely.

[Download Audio: "The Solution" - 208kb] "What we really need (are) some really thoughtful people, not ideologically left or right, but thoughtful people who have the interests of the United States at heart," Herbert told the DePauw Discourse attendees. "And we need a big, extended national conversation about what direction this country should be going in and what is best for ordinary Americans. Now who can begin that conversation in an effective way, I'm not sure, but I'm on the lookout for that."

Herbert, who joined the Times as an op-ed columnist in 1993, visited a sociology class at DePauw before his presentation. There, he 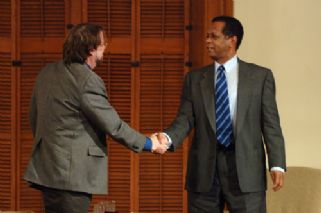 a great life at this wonderful University." As moderator and assistant professor of political science Brett O'Bannon nodded, Herbert continued, "No surprise to you, these are smart kids. There's a lot of smart people in the United States of America. We need to tap into that intelligence, we need to tap into that talent and get away from, like, the screaming and the yelling and the craziness."

"DePauw Discourse 2006: Issues for America" concludes with a 3 p.m. panel discussion, "The Ethics Cauldron: Loyalty, Leaders and Tough Choices," and an 8 p.m. performance by The Capitol Steps.