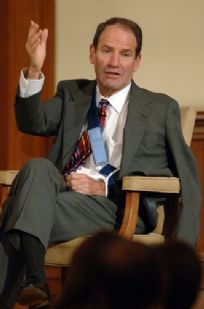 October 27, 2006, Greencastle, Ind. - The U.S. economy is "very, very strong," President Bush's chief economic adviser said at DePauw University this morning, even if many Americans see things otherwise. Allan B. Hubbard, assistant to the president for economic policy and director of the National Economic Council, addressed DePauw Discourse 2006: Issues for America this morning.

Even though the economy has added 6.6 million jobs since May 2003, 40% of Americans approve of President Bush's handling of the economy, near the lowest ratings of his presidency. Hubbard believes there are three reasons why Americans feel the way they do: the ongoing war in Iraq, frustration over the recent spike in gasoline prices (which have since dipped), and the information people are getting about the state of things.

[Download Audio: "Media and Today's GDP #" - 307kb] "The news media only reports bad economic news, and I think we're going to get an example of that tomorrow morning," Hubbard told DePauw Discourse attendees gathered in Meharry Hall of historic East College. The government announced this morning that the nation's gross domestic product was 1.6% in the third quarter, the worst showing in three years, but an "aberration" that Hubbard says the administration was expecting due to a slump in housing starts. Hubbard predicts that in tomorrow's New York Times "front page, above the fold," a headline will 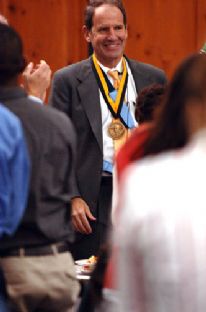 declare that economic growth is slowing, "where if the GDP growth had been 3% it would be buried, and that's the world we live in."

In a session moderated by Mary Dixon, Q.G. Noblitt Professor of Economics and Management at DePauw, Hubbard talked about the administration's concern that America is often "funding our enemies" because of its dependence on oil, and he offered a bold prediction.

[Download Audio: "Free" - 77kb] "I think within 30 years, and I don't know what it'll be, we'll have pollution-free and basically free energy."

As far-fetched as that sounds, Hubbard reminded his audience that it's already happened -- with long-distance telephone calls.

[Download Audio: "Shifting Market Forces" - 201kb] "You know, the cost of a telephone call between London and New York was greater in 1935 than the cost of taking a steamer from London to New York. Today, it costs nothing to make a call from London to New York. Nothing, nothing! It's because of the incredible entrepreneurial inventiveness primarily of the American people, because most of that stuff comes from us which is what's so wonderful about our country."

Hubbard -- who yesterday received the Robert C. McDermond Medal for Excellence in Entrepreneurship from DePauw during a speech to Management Fellows -- asserted,

facing our world today, the war on terrorism. If we could reduce the amount of money going to support the terrorists, it would help enormously. And that's why it needs to be a full court press to get away from oil."

Offering a hint at a possible news story for the new year, Hubbard offered,

[Download Audio: "Future Policy" - 124kb] "We have some ideas we're going to be presenting to the president in the next month or so for the State of the Union (address). I'm hopeful you will see some headlines above the fold that will knock your socks off in terms of our commitment to energy independence, but I can't preview what they are." 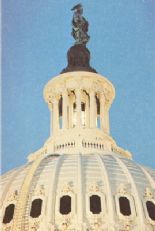 [Download Audio: "Entitlements" - 311kb] "a $42 trillion unfunded liability. If any American company kept its books the way the American government keeps its books their CEO and chief financial officer would go to jail." He added, "They can be addressed and fixed much easier if we do it today rather than waiting until tomorrow or the next day."

Hubbard identified the spending of lawmakers as one of his two biggest disappointments since taking his position.

[Download Audio: "$ Growing on Trees" - 172kb] "Congress -- and, by the way, both sides -- they truly spend our money as if it grew on trees. It's remarkable how they spend money... That's one reason I like to keep things at the state level, 'cause states have to balance their budgets so they have to make trade-offs. But Congress will just throw a billion here, a billion there, 10 billion there. It's amazing."

The president's economic adviser was also asked about health care, and asked the DePauw audience how many Americans actually know what a doctor charges for a visit. The fact is, very few do, since most costs are covered by insurance and seem "free," so prices continue to escalate. He asked the crowd to imagine

[Download Audio: "The 'Free' Mindset" - 486kb] "if groceries were covered by your employer; if you had grocery insurance. So then when you go to the grocery store, you know, it's already paid for, so you would 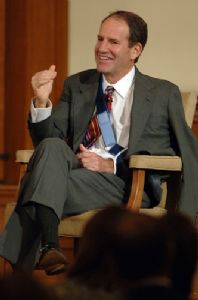 insist on caviar and Alaskan salmon... And if you were told, 'No, no, no, you can't have caviar," you'd say, "Oh, yes, I deserve caviar just like everyone else does.' And you would quit asking about the price, because it's already paid for. And you would buy more than you need, because after all, if you don't use it, well, we'll just throw it away, it's already paid for. You know what would happen over time? Literally, within three or four months, supermarkets would quit putting prices on the products because the consumer wouldn't care about the price. And if I were running the supermarket, I can tell you what I'd do to the price. I'd raise it quite quickly 'cause, after all, no one cares what the price is. And the consumption would grow rapidly and we would have in the grocery industry the same situation we have in health care."

Hubbard wants to create a transparent system where "prudent consumers" are price conscious and shop for health care the way they do for a car or a new suit.

Of the recent downturn in the U.S. housing market, Hubbard states,

[Download Audio: "Hubbard on Housing" - 106kb] "Housing was growing faster than it could on a sustainable basis. Prices were going up by 9 or 10% a year. You know, we can't afford, the American people cannot afford to buy houses if they continue" at that pace." He added, 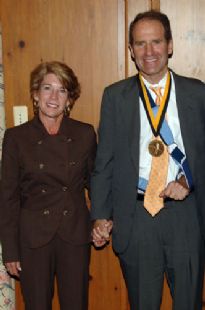 [Download Audio: "A Good Thing" - 49kb] "People don't like to hear this, but the slowdown is actually a good thing. Because otherwise you're going to have a burst of a bubble."

Although manufacturing jobs are declining in America, Hubbard reminded his audience that 100 years ago, 60% of the nation's workers toiled on a farm; it's fewer than 1.5% today.

[Download Audio: "Changing Times, Changing Industries" - 267kb] "But we grow more food today than we did 100 years ago, on a relative basis, because we've become so much more efficient. The exact same thing is happening in manufacturing," he declared.

[Download Audio: "Evolving with the Economy" - 182kb] "We shouldn't ring our hands about this evolution. At the same time, it does make life more challenging for individuals, and that's important that we make sure that people are well trained (and) well educated so they're in a position to evolve with the economy and move to new jobs as the economy changes. And that's why a DePauw University is so critical."

Al Hubbard's wife, Kathy, is a 1974 graduate of DePauw, and the speaker spoke of the "love" they both share for the University.

[Download Audio: "Al Hubbard on DePauw" - 292kb] "I think what is most remarkable about your institution is the outstanding graduates you have. I keep running into 'em," Hubbard said, noting that he talked with two young alumnae at dinner 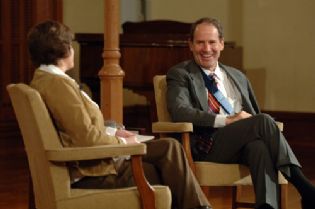 last night and found them "incredibly impressive. (President) Bob Bottoms and you alumni and board members are doing an outstanding job, so keep up the good work. If you talk about our economy, it's all to do with the people."

[Download Audio: "Continued Growth" - 160kb] "We don't see anything on the horizon that suggests we're not going to continue to grow at a sustainable pace in the high twos or low threes, which means our unemployment rate will stay at 4.6% and probably drift down a little bit."

A graduate of Vanderbilt University (B.A.), Harvard Law School and Harvard School of Business Administration, Al Hubbard was previously the director of E & A Industries, a conglomerate in Indiana that owns three chemical companies and other companies. A major fundraiser for George W. Bush, from 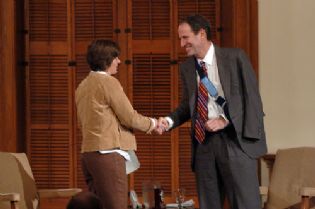 1993-94, Hubbard served as the volunteer chairman of the Indiana State Republican Party and from 1990-92 as deputy chief of staff to the vice president of the United States and executive director of the President's Council on Competitiveness. He is the past chairman of the Indiana State Chamber of Commerce, on the Executive Committee of the Educational CHOICE Charitable Trust, and on the Board of Trustees of Hudson Institute, Maxon Corporation, Park Tudor School and Anthem Corporation. Hubbard was chosen Small Business Person of the Year in 1983 for the State of Indiana by the Small Business Administration. He also is a member of the Tennessee Bar.

DePauw Discourse 2006: Issues for America opened yesterday with an afternoon discussion between Lee Hamilton '52, co-chair of the Iraq

Study Group, and John McWethy '69, the longtime ABC News journalist, on the topic, "How Deep is America's Crisis?" Last night, the U.S. Secretary of Education, Margaret Spellings, presented a speech at Kresge Auditorium.