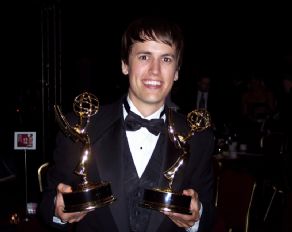 Ohs' winning entry in the "Advanced Media-Arts/Entertainment" category is a video from his music blog, the Anchor Center.

"It was a really fun night," reports Ohs, who was a computer science major and Information Technology Associate at DePauw. "We had chicken and salmon for dinner. I ate the 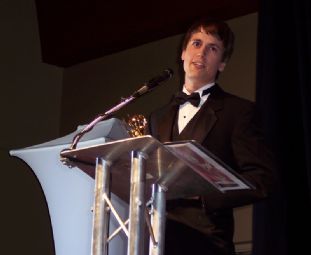 chicken. And they had a salsa band too. Then I won two Emmys. I really can't complain."

The field of nominees for Saturday's Emmy Awards also included Susan Dinkel, a 1995 DePauw graduate, who is a news anchor and assistant news direector at WTHI-TV in Terre Haute, Indiana. She was nominated in the "Religion-Program" category for the documentary, Pilgrimage to Rome: The Path to Sainthood. In October 2006, Dinkel and chief photographer Mike Latta traveled to Rome, chronicling the story of Blessed Mother Theodore Guerin and her recognition as a saint by Pope Benedict XVI in a canonization mass at the Vatican. It marked the first Emmy nomination in WTHI's 53-year history.