S.S. DePauw Victory is Launched One Week Ahead of Schedule 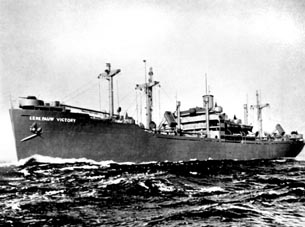 February 7, 1945, Greencastle, Ind. - The S.S. DePauw Victory, a 10,730 ton cargo ship named after DePauw University, was launched tonight at 11 p.m. in the California shipyards where it was constructed. The launching was originally scheduled for February 13, but the ship was completed ahead of schedule and consequently was launched for immediate service.

Due to the speed with which the vessel was constructed, no official representative of the University was able to be present at the launching ceremony. T.A. Bedford, assistant general manager of the Richmond Shipyards, spoke at the vent and Mrs. Harry Trede, wife of the port captain, performed the traditional christening ceremony.

In his remarks, Bedford told of the founding of DePauw and its eminence in the field of liberal arts and music. "In the naming of this series of victory ships the Maritime Commission pays tribute to a group of the earliest institutions of higher learning in the United States," he said.