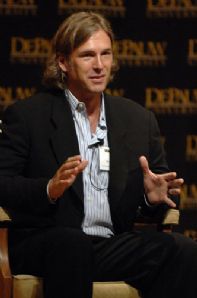 [Download Audio: "An Ocean Planet" - 422kb] "Our planet is an ocean planet, period," exclaimed Wallace J. Nichols, senior researcher for Ocean Conservancy and 1989 graduate of DePauw University, this morning at DePauw Discourse 2007: Sustainability and Global Citizenship. A scientist responsible for pioneering research on the migration of sea turtles, Dr. Nichols reminded his audience that oceans comprise 71% of the Earth's surface, approximately 80% of the planet's biodiversity is in the ocean, and 90% of the habitat is marine. "So when we talk about global warming, when we talk about the environment, we have to address the ocean."

But according to Nichols, who is featured in Leonardo DiCaprio's 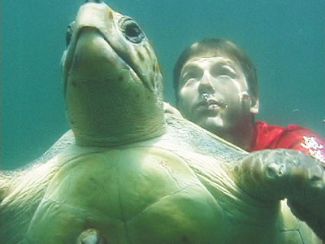 The 11th Hour (which was screened on campus last night), oceans don't figure prominently in environmental discussions, whether they take place at scientific conferences or on the streets. "It may get 1%" of the attention, and "it gets 1% of the eco-dollars, or the conservation dollars. Less than 1% of the ocean is protected," he told a crowd of DePauw alumni, students and faculty in the Judson and Joyce Green Center for the Performing Arts' Thompson Recital Hall.  "So there's a big imbalance in the reality of our planet and the life system of our planet, and the attention and our need to protect it."

People used to think, because the oceans are big, "dilution is the solution to the pollution."  While that slogan may have had some merit when fewer than a billion people lived on the Earth, the planet is now approaching 7 billion human occupants.

[Download Audio: "The Ultimate Accumulator" - 318kb] "We had this idea that the ocean was boundless in its ability to give us food, to provide nourishment and to accept anything 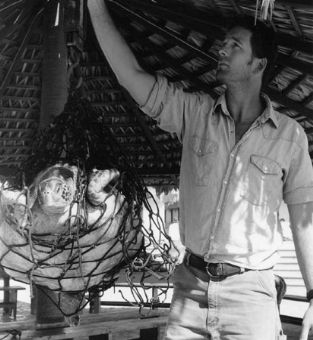 we could possibly throw into it," according to the scientist, educator, and ocean activist who is known my his middle initial, "J".  "And it did for a very long time. We polluted the ocean and the ocean just sort of dissipated, dispersed with our trash and our run-off.  Now we're getting to the point where there are so many of us producing substances that the planet has never seen, that the ocean cannot break down, like plastic and toxic chemicals," Nichols asserted, adding, "The ocean is the ultimate accumulator."

Nichols described how his fascination with sea turtles began during his boyhood.

[Download Video: "The Seeds of a Career" - 2218kb] "We would catch these snapping turtles -- big snapping turtles -- out of the Chesapeake Bay and then paint numbers on their shells," he recalled, "and then let the turtles go.  And eventually we'd catch some of the turtles with our numbers on their shells and we did, in our heads, some simple calculations to figure out population size based on percentage tagged and recaptures. Little did I know that that was fundamental mark-recapture research that wildlife ecologists around the world do."

The research associate at the California Academy of Sciences continued, "At some point I found out -- I think it was late in my education here at DePauw -- that you could actually make a living catching animals and looking at them, learning some things and letting them go and maybe recapturing them

later, and you could make a living doing that with turtles, sea turtles."

The creatures that fascinated Dr. Nichols, then and now,

[Download Audio: "Making a Contribution" - 366kb] "hang out in some pretty beautiful places.  At the time that I began studying sea turtles, they were considered mysterious animals. There was a lot about their lifestyle, their life history, that we didn't know. We didn't know how they navigated, where they navigated, where they came from; their migration routes across the oceans were largely unknown. So as a biologist, as a young biologist looking to make a contribution to science this was a ripe territory, and I felt like I could take my skills as a scientist and apply them to study these animals and fill-in some of the empty spaces in our understanding of their natural history."

In 1996, J. Nichols became the first researcher to attach a transmitter to a Baja sea turtle and track it as it traveled from Mexico to Japan. That event was highlighted in the spring by PBS' Nature, in a show titled, "Voyage of the Lonely Turtle." Good Times, a weekly newspaper in Santa Cruz, California, describes Nichols as "a soulful creature and an ecological patriot. But don't let the cool blue eyes fool you. The man's on fire. And as a staunch 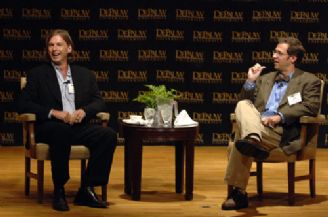 advocate for helping restore the damages already done to the world's oceans, he's clear about one thing: Healing the planet isn't going to happen by using a verbal bandage."

In his DePauw Discourse conversation with Jay Hosler, Lee G. Hall Distinguished Visiting Professor of Biology and fellow 1989 graduate of the University, Nichols discussed his work -- not just with turtles but with commercial fishermen and villagers, to help them understand the delicate balance of nature and why protecting endangered sea turtles is important. He described meeting with fishermen and playing with their children and the relationships they have cultivated, and how -- in many cases -- attitudes and behavior were changed as a result.

[Download Audio: "Building Bridges" - 504kb] "It's a little word with a big, heavy, important, deep meaning," Nichols says. "There are things that you can do as a scientist 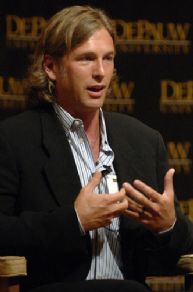 when you're working in the field that will build trust, and there are things that you can do that will undermine trust. And I think it's a good idea to consider that before you step out and engage with a community."

Nichols, who majored in biology at DePauw and later earned a master's degree from Duke University's Nicholas School of the Environment '92 and a Ph.D. from the University of Arizona in wildlife and fisheries science and evolutionary biology, says learning "trust-building" is not something many consider during their college years. He noted, "Increasingly there are programs, like here at DePauw, in ethics, and that can extend to medicine, business, field research, conservation. It's extremely important to think about some of these things, because those of you have maybe gone and done any kind of field research or field photography, as the case may be, know that you step into a situation where there may be baggage from the person who came before that you may not know about ... and you may have to clean it up."

The co-author of the book, Chelonia: Return of the Sea Turtle, Nichols discussed the generation gap that exists when it comes to understanding environmental issues 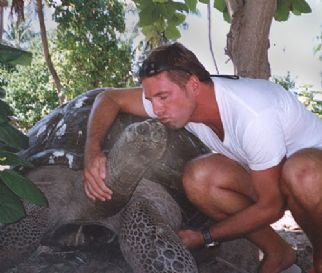 [Download Audio: "Age & Attitudes" - 202kb] "Kids are -- they just know it, they get it.  When you teach them about nature and teach them about the connections they internalize it," he said. "Adults, we all have our systems and routines and our rigid formula, and it's harder. But it's not impossible." Nichols pointed out that his father, whom he's been chiding "for 20 years" to reduce his carbon footprint, made a series of lifestyle changes after seeing The 11th Hour.

Whether it's the CEO of a major corporation or his own father, Nichols says every decision -- no matter how seemingly small -- matters when it comes to conserving resources and preserving the environment.

[Download Audio: "Charging Ahead" - 349kb] "There's a personal connection that has to be made.  This isn't just bottom line, dollars and cents. It takes leadership, and that leadership involves ethics and involves just doing the right thing and knowing what the right thing is and taking a leap and being first, or second, or even third." Nichols added, "At the CEO of Wal-Mart and Starbucks level, and at the head of the fishing co-op level in Mexico, or just the head of a household level, or just at the individual level, it's ultimately the same thing. There's a moment where you say, 'You know what? This is important, this is the right thing and I'm just gonna do it. And I'm gonna charge ahead."

tomorrow, including a keynote address by Robert F. Kennedy Jr. tonight at 8 p.m.