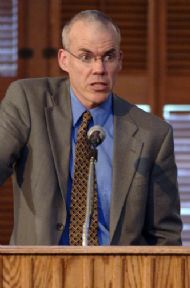 The author of 1989's The End of Nature, regarded as the first book for a general audience about climate change, McKibben addressed an audience that filled Meharry Hall. He says that the data from peer-reviewed journals are conclusive: global warming is quite real and that environmental changes are taking place much faster and on a larger scale than was predicted even a few years ago. 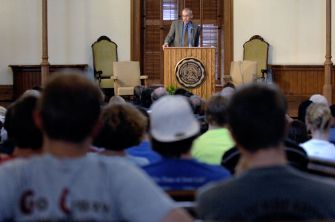 "We need some kind of strong, aggressive, active climate movement to emerge in this country," he asserts. Earlier this year, he helped organize one of the largest demonstrations against global warming in American history, encompassing 1,400 rallies in all fifty states. McKibben called on students to ponder the "politics and possibilities of environmental issues" and become agents of change.

[Download Audio: "Charting a Different Course" - 259kb] "We need to push hard, and we need to be frank about what it is that has to be accomplished," the author and environmentalist told the crowd of DePauw students, faculty members and alumni. "Our political system is used to advancing very incrementally -- to make small advances, 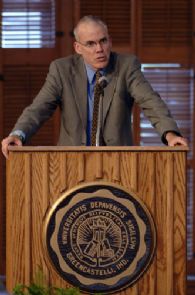 to bargain back-and-forth between liberals and conservatives, whatever it is. That's an appropriate way to make progress on most issues. Unfortunately, given the fact that we've delayed action on this one so long, it no longer is appropriiate," he says.

Bill McKibben's other books include The Comforting Whirlwind: God, Job, and the Scale of Creation; Enough: Staying Human in an Endangered Age; and March 2007's Deep Economy: The Wealth of Communities and the Durable Future. A Sunday school teacher in his Methodist church in Vermont, the author admired the church-like atmosphere of the room where DePauw's chapels were held for many years as he offered his assessment of "out of control" environmental damage and the consequences it will bring to our lives.

Since the 1950s, homes in this country have become much larger and its occupants more insular, says McKibben, noting that three-quarters of Americans don't have a relationship with their next door neighbor. He maintains that the people of Western Europe -- who use, on average, half as much energy as their U.S. counterparts -- have a much stronger sense of community. He stressed that if we are serious about changing 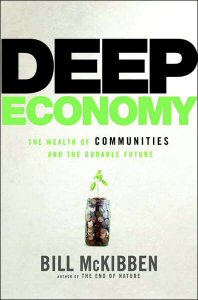 the course of environmental damage, we must -- as 4% of the world's population producing 25% of the world's greenhouse gases -- change our lifestyles in ways that may not be easy.

[Download Video: "A Test of Maturity" - 1210kb] "What we're basically talking about is whether we want to try to continue the way of life exactly as we've had it for the last 40 years for another 20 or 25. That's how much coal and oil, whatever, there is to continue ... maybe another 40 if we were really lucky," he said. "If we decide to do that, then the effects will last for hundreds of thousands of years. Or we can decide to make the transition away from that fuel now instead of 40 years from now, and that's a test of maturity that we've never had to face before." 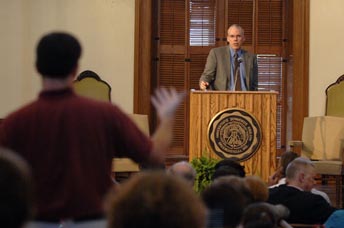 While it is a global problem, McKibben believes

[Download Audio: "American Leadership" - 197kb] "We have to face it in this country first. It is impossible to ask the Chinese and the Indians not to do it until we've made credible commitments to do it ourselves. Because they know and we know that it's we who have put all that carbon in the atmosphere for the last hundred years, and in per capita terms it's we who continue to put the lion's share there."

DePauw Discourse continues tonight at 8 p.m. with a special screening of The 11th Hour, the new environmental documentary produced and narrated by Leonardo DiCaprio, with a discussion to follow. Other programs tomorrow and Saturday will include a keynote address Friday night by Robert F. Kennedy Jr.

[Download Audio: "McKibben on DePauw Discourse" - 147kb] "It really is a pleasure to 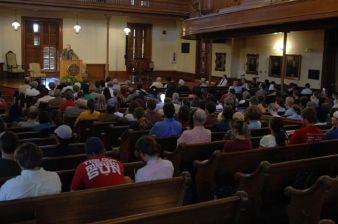 be with you, alumni and students, to start this discourse which, from the descriptions of the programs ahead in the next few days, will be a rich and important contribution to the most important ongoing debate on this planet at the moment."