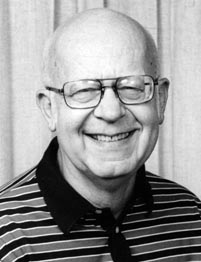 March 7, 1988, Greencastle, Ind. - Dan Hanna, DePauw University's director of bands for the past 35 years, will conduct his final concert this Thursday, March 10, at 7:30 p.m. in the Performing Arts Center's Kresge Auditorium. The concert by the DePauw University Band is free and open to all.

A reception for Professor Hanna, who is retiring at the end of the current academic year, will follow Thursday's performance.

"Those of you who know Dan's energy and his love for his students will find it hard to believe that after 35 years he will retire," says Patrick Reynolds, assistant professor in the DePauw School of Music. "Dan's work with the University bands has been an integral part of student and faculty life here at DePauw, whether in concert at Meharry Hall or the PAC, or in countless appearances at football and basketball games." 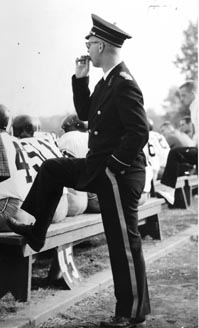 from the University the following year, then headed to Andalusia, Alabama, where he served as director of instrumental music in the Andalusia City Schools for four years. He returned to DePauw as a faculty member in July 1952.

Hanna is a member of the Music Educators National Conference and a charter member of the Indiana Bandmasters Association, which he served as president during 1962-63. He was also a member of the 624th Army Air Force Band in Hondo, Texas.