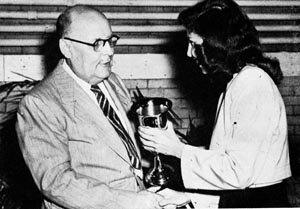 May 27, 1949, Greencastle, Ind. - Roger G. Swaim, publisher of Indiana's Bluffton Evening News-Banner and 1920 graduate of DePauw University, today received his alma mater's Old Gold Goblet at the annual senior-alumni banquet in Bowman Gymnasium. Awarded each year since 1941 by vote of the senior class, the goblet is given for "eminence in life's work and service to alma mater." (photo: Swaim receiving the cup from Charlene Quinn, president of the senior class)

A.W. Crandall, professor of history at DePauw, delivered a speech which was received enthusiastically by the audience.