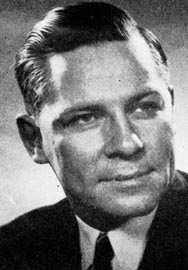 June 15, 1949, Greencastle, Ind. - Alex Clark, municipal court judge in Indianapolis and a member of DePauw University's Class of 1937, today received the Jaycee's Distinguished Service Award. The honor recognizes the individual who contributed the most to the city in the previous year.

"Because this nation's future rests with its young men, it is reassuring that many of them are emerging to take over responsible positions in both public and private life," notes an editorial in the Indianapolis News. "The award was richly deserved. Judge Clark not only served the community by his administration of Municipal Court, Room 4, but he has contributed many hours to a host of civic and charitable endeavors." The newspaper adds, "When the community is served by a young man of Judge Clark's caliber, it should be both grateful and appreciative."

After attending DePauw for two years, Clark transferred to the Indiana Law School, from which he graduated.