[Download Video: "Matt Jennings '09 Addresses Classmates" - 821kb] "We have a great deal of work and quite a challenge ahead of us," Matthew R. Jennings told fellow members of the Class of 2009 at DePauw University's 170th annual commencement this afternoon. "I thank you for the past four years and all the memories, experiences and friendships we have shared. All that we need to do now is jump."

Jennings, who hails from Sylvania Township, Ohio, is the 2009 recipient of the Walker Cup. Named for 1890 DePauw graduate Guy Morrison Walker, the award recognizes the senior student judged to have contributed the most to the University during his or her four-year college career. The Walker Cup recipient traditionally addresses his or her graduating class.

Jennings was an Honor Scholar who double majored in 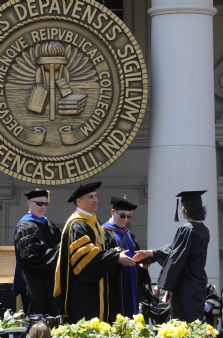 French and political science and served as student body president. He told the audience of a rope swing in the Putnam County countryside which his friends enjoyed jumping from, over a rocky area, and into a small lake below. At first fearful of taking the plunge, Jennings was finally convinced by his pals to jump off the rope and into the water. The risk was well worth the reward, Jennings recalls, calling the feeling of flinging himself from the swing into the water "awesome."

He added, "But believe it or not, rope swings on small lakes in rural Indiana aren't the only things that evoke fear in this world." Jennings reminded the 514 other students who sat before him in caps and gowns, "We live in a time of increased uncertainty, a time when major corporations that were once the backbone of this country's economy and the employer of thousands of people are now struggling to make payroll. We live in a time when issues ranging from terrorism and war to climate change and global health crises are the main headlines that dominate the nightly news and the morning paper." (photo at left: Alex Turco '10)

Jennings told classmates that they should see the state of the world as an opportunity.

[Download Video: "Meeting The Challenge" - 889kb] "I challenge you, my classmates, to take the knowledge, work ethic and skill sets that your family, friends, professors and mentors have instilled and shared with you throughout life and solve these issues. Is this a big challenge?," he asked. "Yep. But if it had to be given to one generation, one graduating class, I'm glad it is ours, the DePauw Class of 2009. I know that we can do it."

Today's ceremonies took place in Holton Memorial Quadrangle under blue skies and temperatures in the mid-60s.

[Download Video: "President Brian W. Casey" - 4209kb] "Members of the great Class of 2009, there are a million things I want to tell you about life and love and 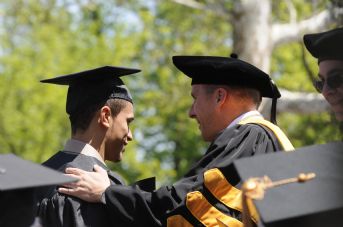 work and the way things are," DePauw's nineteenth president, Brian W. Casey, said as he closed his first year leading the University. 'That, of course, is not my job here today and now. Besides it's always struck me as odd when a dean or president would come to a podium at a commencement ceremony to tell the class the secrets of life, as if the institution had somehow decided for some mysterious reason to withhold such secrets from you for the past four years. But, in fact, this faculty and the deans and all the staff have wanted nothing more than to give you all the secrets of life -- whether they came in the form of a poetry class, or a geochem lab, or a study session, or in the comments of (Professor) Andrea Sununu's papers -- in a thousand different ways we wanted to give you the whole world, or the tools we thought you needed to make your way."

Dr. Casey, who came to DePauw from Harvard last July, continued, "So now it's time to make your way, and you're ready ... The secret of life is to open your eyes, open your mind, open your heart. To be educated, of course, is not to know everything. In fact, there's very little we can know of the whole world. But you can be ready for the world; ready to face it with bravery and courage right now if you're ready to love its many expressions. For it's love we're talking about today, and wonder and joy. That is what I hope you've found here and that is what I hope you bring to the world, the world waiting for you right now."

In the ceremony's principal address, John Dittmer, Bancroft Prize-winning historian and professor emeritus of history at DePauw, called upon the Class of 2009 to seize the historic opportunities they have to build a better nation and world. A summary of his address, including video and audio clips and an MP3 file of the complete remarks, can be accessed in this story.

Dittmer and David Cryer, a noted entertainer and 1958 graduate of DePauw, each received honorary doctoral degrees, which are summarized here.

Two retiring DePauw faculty members were honored today: Thomas D. Hall, Edward Myers Dolan Professor of Anthropology and professor of sociology and anthropology, who has taught at DePauw since 1989 will be retiring in June 2011, but this is his last semester on campus; and Robert J. Stark, professor of biology, who came to the University in 1981. (bottom two images: Alex Turco '09)

A commemorative DVD of DePauw's 2009 commencement is available. The professionally replicated disc will include the complete program as well as a photo gallery and a variety of bonus material. The DVD can be purchased using this online form. Learn more about the project in this story.