Mary Meeker '81 Joins Board of Square

June 30, 2011, Greencastle, Ind. — Mary Meeker, a partner at Kleiner Perkins Caufield & Byers and 1981 graduate of DePauw University, is joining the board of directors of Square, "which also includes former U.S. Treasury Secretary Lawrence Summers," reports the Times of India. Square is a mobile payment service whose "technology lets people use their mobile phones to accept credit card payments from other people," notes the report.

A psychology major at DePauw, Mary G. Meeker was a technology analyst and managing director at Morgan Stanley before joining Kleiner 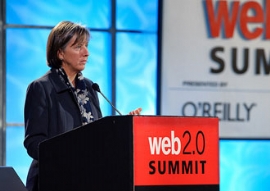 After earning a B.A. from DePauw, where she majored in psychology, Meeker received an M.B.A. in finance from Cornell University. Meeker also holds an honorary Doctor of Letters degree from DePauw. She was recently announced as one of the featured speakers at Web 2.0 2011 summit.