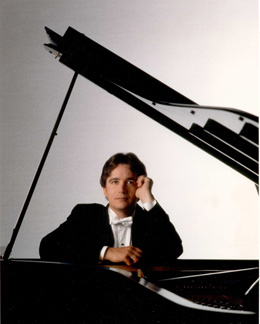 October 20, 2011, Greencastle, Ind. — The DePauw University School of Music welcomes  pianist Ian Hominick for a master class and recital next week.  The Tuesday, October 25 master class will take place at 6:30 p.m. in Thompson Recital Hall of the Green Center for the Performing Arts, with the performance at 7:30 p.m. on Wednesday, October 26, in the same venue. Both events are free and open to the public.

Ian Hominick began studying piano in his native Nova Scotia at the age of seven. He attended Mount Allison University in the province of New Brunswick where he was a student of Jamie Syer and Patricia Elliott. Continuing his studies in the United States under the tutelage of internationally acclaimed pianists Jerome Rose and Earl Wild, he earned the Doctor of Musical Arts degree from Ohio State University in 1991, where he served as assistant to pianists Earl Wild and Tchaikovsky Competition silver-medalist André Laplante. Hominick has gone on to establish a solid reputation as a first-rate pianist and one of today’s most popular artists. His performances help to bridge the gap between performer and audience.

An active soloist, accompanist, adjudicator, and teacher, Hominick maintains a busy schedule of concerts and piano masterclasses across the United States and Canada, including solo recitals in Chicago, Cincinnati, Ottawa, Montréal, Milwaukee, and New York City. He recently made his European debut with concerts in Rome, Italy. Hominick has appeared as soloist on the Dame Myra Hess Memorial Concert Series, Chicago-Chautauqua Series, American Landmark Festivals, and has been a featured guest for Saskatchewan’s Rites of Spring Festival, the Hornby Festival Society in British Columbia, and the American Liszt Society Festival. His performances have been broadcast both regionally and nationally on CBC Radio and National Public Radio in the United States. He is a frequent guest for Chicago’s syndicated radio program, Live From WFMT.

Hominick’s premiere solo recording of the works of the legendary romantic pianist, Sigismund Thalberg, was released by Titanic Records in 1995. The Chicago Tribune noted that “...Thalberg’s blending of drama and minor-key lyricism is wholly compelling in Hominick’s hands...” Off the Beaten Path, featuring rarely-heard repertoire, was released on MSR Classics in November 2009.

A dedicated teacher, Hominick has been Visiting Artist at the University of Newfoundland and has taught on the faculties of Otterbein College, the Wisconsin Conservatory of Music, DePaul University, and Lake Forest College. He has also served on the national piano jury for Canadian Music Competitions. Hominick joined the piano faculty at the University of Mississippi in 1999 and is founder and artistic director of the Piano Discoveries Summer Camp.