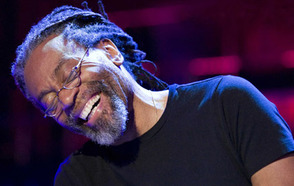 You probably remember him as the guy who wrote “Don’t Worry, Be Happy.” Bobby McFerrin is that guy, as well as the winner of 10 Grammy Awards and the first a cappella artist to have a song reach #1 on the Billboard “Hot 100” chart. On Tuesday, April 15, McFerrin and his band will come to DePauw University for a 7:30 p.m. concert at the Green Center for the Performing Arts, offering an audience the opportunity to not worry and be happy on tax deadline day.

The program at DePauw, the third stop on McFerrin’s tour in support of his latest recording spirityouall, is an evening of spirituals inspired by the singer’s father, the great baritone Robert McFerrin, who provided the singing voice for Sydney Poitier for the film version of Porgy & Bess and was the first African American man to sign a contract with the Metropolitan Opera Company. He was also a renowned interpreter of the American Negro Spiritual.

“I always thought that someday I’d sing these songs,” Bobby McFerrin says, “and it was finally time.” 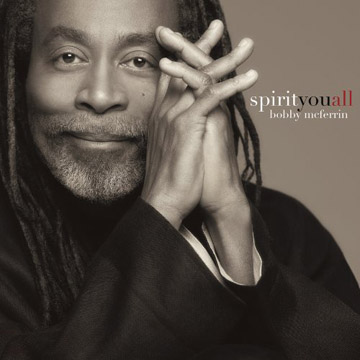 His latest album, spirityouall, is a bluesy, feel-good recording, an unexpected move from the music-industry rebel who singlehandedly redefined the role of the human voice with “Don’t Worry, Be Happy,” his collaborations with Yo-Yo Ma, Chick Corea and the Vienna Philharmonic, his improvising choir Voicestra, and his legendary solo vocal performances.

Spirityouall features beloved familiar tunes like “He’s Got the Whole World In His Hands” and “Every Time I Feel The Spirit,” alongside original songs that explore McFerrin’s daily search for grace and wisdom. New material ranges from a celebratory hoedown (“Rest”) to a polemic anthem (“Woe”), to a blues setting of Psalm 25:15. The project embraces the singer's folk, rock and blues influences without abandoning the fearless improvisational approach for which he is known or his never-ending exploration of the human voice. He moves seamlessly between lyrics and wordless lines, trading phrases with his band, inviting the audience to sing along.

McFerrin’s recent appearance alongside The Roots on the Tonight Show with Jimmy Fallon included an unexpected bonus. Towards the end of the performance, the singer made his way across the stage to the host’s desk, handed him a microphone and began scatting in the slightly surprised Fallon’s face. Fallon joined in, and like The Beatles’ debut on the Ed Sullivan Show, it was instant television classic. Their joint 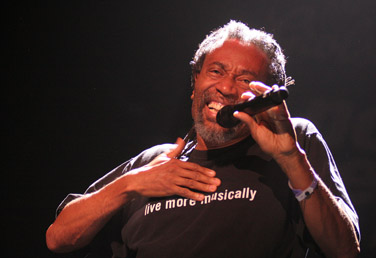 enthusiasm for the music was contagious even to television viewers.

As McFerrin often invites audience to join him onstage, you may have that chance on Tuesday.

General admission tickets for Green Guest Artist Concerts are $10–15 and are available online and at the Green Center box office.  Tickets for seniors, children and all students are free, thanks to season sponsors Judson and Joyce Green.  For assistance with obtaining tickets, visit www.depauw.edu/music/tickets or stop by or call the Green Center box office, (765) 658-4827.