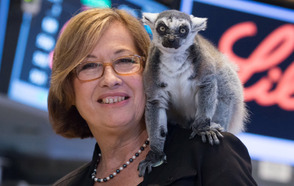 American primatologist, anthropologist, and conservationist Patricia Chapple Wright -- the winner of the 2014 Indianapolis Prize -- will come to DePauw University to discuss her work in Madagascar.  Dr. Wright will address "Saving Lemurs from Extinction: The Challenges" on Sunday, September 28, at 3 p.m. in the ballroom of DePauw's Memorial Student Union Building (408 S. Locust Street).  The event is free and open to all; a reception and book signing opportunity will follow the speech. (photo: Ben Hider)

Considered to be one of the world's foremost experts on lemurs, Wright is best known for her 26-year study of social and family interactions of wild lemurs in Ranomafana National Park, Madagascar. She is the founder of the Institute for the Conservation of Tropical Environments (ICTE) and Centre ValBio (CVB).  In the late 1980s she spearheaded an integrated conservation an 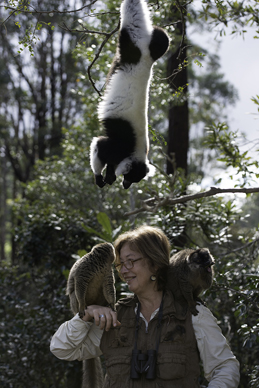 d development project that, in 1991, led to the establishment of Ranomafana National Park.

In her DePauw address, Dr. Wright will present the challenges, cooperation and triumphs in her efforts to save some of the most critically endangered species on Earth. Wright gives new meaning to the phrase, "It takes a village." Audience members will learn how a team effort between the Malagasy government, the villagers and Wright is making life better not only for the people, but also the lemurs. (photo at left: Warner Bros. Entertainment Inc./Drew Fellman)

Wright has received many honors for her conservation work, among them, the 1995 Chevalier d’ Ordre National National Medal of Honor of Madagascar. She was featured in a 3-D IMAX documentary released nationwide in April 2014, Island of Lemurs: Madagascar, narrated by Morgan Freeman. In October 2013, her  book, High Moon Over the Amazon: My Quest to Understand the Monkeys of the Night, was released.

Dr. Wright is currently a distinguished professor in the department of anthropology at Stony Brook University. 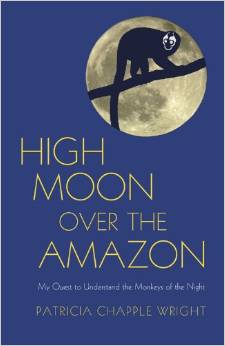 The Indianapolis Prize is the world's leading award for animal conservation. Wright will be presented with the award on September 27, the day before her DePauw appearance, at the JW Marriott in downtown Indianapolis.

Presented by the Indianapolis Zoo, the Indianapolis Prize is an award given every other year to an individual who has made significant strides in conservation efforts involving an animal species or multiple animal species. Previous recipients are George W. Archibald (2006), George B. Schaller (2008) Iain Douglas-Hamilton (2010) and Steven Amstrup (2012). As the 2014 winner, Dr. Wright will receive an unrestricted award of $250,000 and the Lilly Medal.