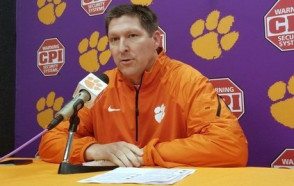 Brad Brownell, head men's basketball coach at Clemson University and 1991 graduate of DePauw University, is Sports Illustrated's National Coach of the Year. Brownell led his team to a 25-10 record and the Tigers made their first appearance in the NCAA Tournament's Sweet 16 since 1997.

The publication notes, "After being picked to finish 13th in the ACC’s preseason poll, Clemson went on to win 11 games in conference play (fewer than only Virginia and Duke), earned a No. 5 seed in the tourney and reached the Sweet 16 by handling a solid New Mexico State team in the first round and whipping No. 4 seed Auburn in the second. Not even the loss of senior frontcourt cog Donte Grantham to an ACL tear in January could derail Brownell’s remarkable turnaround." 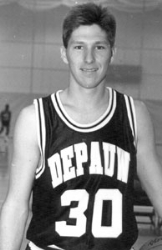 Brownell was a standout as a basketball player for the DePauw team that reached the 1990 NCAA Division III championship game. Video highlights of that contest are embedded below.