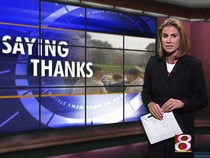 [DOWNLOAD VIDEO: "The Chief" 338KB] "To bring all emergency [crews] who responded to the scene in to one location and have a huge dinner like this, it's just unbelievable," Greencastle Fire Chief Bill Newgent told Indianapolis CBS affiliate WISH-TV in a story that aired in the station's 11 p.m. newscast tonight. Reporter Shana Kelley was on hand as DePauw administrators served dinner to the more than 150 firefighters who battled the April 7 blaze at a University dormitory. She said the meal

[DOWNLOAD VIDEO: "Saying Thanks" 300KB] "was really all about saying 'thank you' to the men and women who not only saved Rector Hall, but more importantly, saved the lives of the students who were inside the dormitory the day of the fire."

heroic," said DePauw President Robert G. Bottoms, who was interviewed in an apron as he carved prime rib for the special guests. "We went through the fire without people getting hurt. They saved the building. Writing a simple 'thank you' letter didn't seem to be enough," the President added.

The report noted that Dr. Bottoms,

[DOWNLOAD VIDEO: "Thankful" 531KB] "along with other thankful school adminstrators, are serving up more than food for these emergency 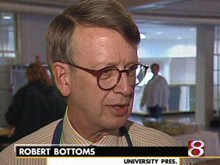 workers." The president told WISH, "We didn't want to send a note saying, 'Go have dinner on us,' we wanted to serve dinner to the firemen."

Bottoms and Chief Newgent also talked about their pride in how the Putnam County community came together in so many ways on April 7th and in the days following the fire. "To live in a small town and have the kind of assistance we had -- and to have the kind of home town fire department we had -- we feel is really a blessing in this size city," Dr. Bottoms said. 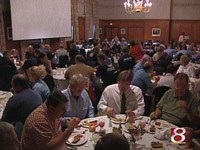 You can read a story on WISH-TV's web site by clicking here.

A story posted the day of the fire can be found here, while another story on plans to rebuild Rector Hall is available by clicking here.