September 28, 2002, Greencastle, Ind. - Vernon E. Jordan Jr., senior managing partner at Lazard LLC and a 1957 graduate of DePauw University, is cited as one of "The Top 50 African Americans On Wall Street" in the October issue of Black Enterprise. The magazine notes that Jordan has "dominated Washington power circles and served as a confidant to former President Bill Clinton." In July, Forbes listed Jordan as the ninth most powerful black executive in America (read more here).

"Wall Street has long been recognized as the capital of free-market America and the seat of global financial power," a news release from Black Enterprise states. "For African Americans, The Street is also a powerful symbol of the continuing struggle for full and equal access to economic power. Today, despite the intense pressures, high turnover rates, and brutal performance standards of the financial industry, African Americans are continuing to move forward, shattering barriers to advancement and raising the bar of excellence." You can access the story here and the news release by clicking here.

Vernon Jordan is also known for his work in the civil rights movement. He served as president of the National Urban League and survived an assassination attempt. In July 2001, Jordan was the recipient of the National Association for the Advancement of Colored People's Spingarn Medal, the NAACP's highest honor for achievement (read more here). Mr. Jordan marked the release of his memoir Vernon Can Read! with a speech at DePauw's Old Gold Convocation on October 27, 2001, in which he spoke of his days as a student in Greencastle, of how "DePauw has become a different and better place," 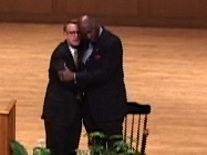 and he discussed his life in the civil rights movement and the terrorist attacks on America that had taken place the month before. You can access a story, complete with video and audio clips of Jordan's speech, by clicking here. clicking here. In July 2001, Mr. Jordan was the recipient of the National Association for the Advancement of Colored People's Spingarn Medal, the NAACP's highest honor for achievement. Video, audio and text of his acceptance speech are available here.