[Download Audio: "Disappearing Division" - 85kb] "This sort of clear division between foreign policy and domestic policy obviously doesn't exist anymore -- look at Katrina and the links between Iraq and preparedness for a hurricane on the Gulf Coast," said human rights scholar and Pulitzer Prize-winning author Samantha Power. The author of A Problem from Hell: America and the Age of Genocide and professor of practice in public policy at Harvard University's John F. Kennedy School of Government, Power addressed a morning session of DePauw Discourse 2005, a three-day symposium that is examining issues of ethics and leadership.

human rights abuse, doesn't kind of fit in that paradigm of what states are there to do and there to pursue."

[Download Audio: "Avoiding the Issue" - 167kb] "We want to be a country that responds to genocide, we really do," Power told Ken Bode, Eugene S. Pulliam Distinguished Visiting Professor of Journalism at DePauw, who led today's conversation in Meharry Hall. "So when genocide occurs, we don't want to say, 'Oh, it's genocide and we've looked at our national interests... turns out that doesn't measure up, therefore, we're not going to do anything about the killing of 800,000 people.' That's not how human nature works, that's not how bureaucracies work. We instead sort of don't seek out information that would be inconvenient to our self- 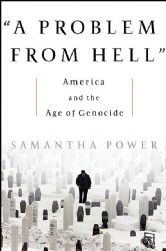 perception as a country or as individuals within a country."

Power was the founding executive director of the Carr Center for Human Rights Policy (1998-2002). From 1993 to 1996, Power covered the wars in the former Yugoslavia as a reporter for the U.S. News & World Report, the Boston Globe, and the Economist. She says it has been disappointing over the years to see "skepticism in the executive branch" about the need to incorporate human rights into foreign policy.

[Download Audio: "Lack of Accountability" - 288kb] "The bigger disappointment for me over the last 10 years, and this includes the Clinton years, is the disappearance of the legislature as a force for accountability in this country ... We'll see if we see it on Katrina, we'll see if we see it on Iraq, we're probably never going to see it on Guantanamo, but when it comes to funding allocations and accountability, which I think are the two ways you can really make a difference in terms of integrating regard for human rights into foreign policy -- which I have to say I believe is in our national interests in a strategic sense, in a security sense -- but the only way that's gonna happen is if the Congress begins to assert itself more rather than deferring as it has, especially in

the wake of 9/11, to a kind of imperial presidency, which happens always in wartime."

The public outcry after Americans saw images of Bosnians in concentration camps, and Bob Dole's 1996 presidential campaign criticism of the Clinton administration's reaction to the genocide, prompted action and change, says Power.

[Download Audio: "Changing Attitudes" - 269kb] "The fact that genocide or concentration camps or the deaths that are now occuring in Darfur could be the subject for domestic politics is a sign of how education has changed, how course curriculums are changing, and how, to an extent, media has helped educated and bring into the living rooms suffering that for the better part of the twentieth century was so far off limits that it remained very abstract. The fact that you could see those men, in real-time, looking just like those black and white pictures we had all seen from the Holocaust, made a profound difference on whether people were prone to call their congressman, and the Congress, in turn, made a profound difference on the executive branch."

politics in this country, you have to acknowledge that the internal behavior of states has become the purview for this administration," Powers told the crowd that filled the hall. "There's an obsession, in fact, with democratization -- freedom is the chosen word, not human rights. You've seen that trend, really, from Jimmy Carter onward: an increasing attention to human rights performance within states. That doesn't mean that a state like the United States is willing to put much on the line to alter state practice, but it means it views it as its sovereign right to meddle, and to look, and to criticize, and to hold accountable."

[Download Audio: "New Language" - 252kb] "Some of the speeches the president gives are speeches that... five years ago, if you'd shown me this speech and said 'An American president will deliver this speech in your lifetime,' I would've said 'You're crazy' ... So, President Bush has become an incredible spokesperson for these values that many of us have been pushing for for a long time, and many of you, I'm sure. But, because of decisions that have been made,

policies that have been undertaken and a lack of curiosity from them, really, about cultural difference and so on, this message has never been so unwelcome overseas."

Power told her DePauw audience that the war in Iraq is going "horribly wrong." She's currently finishing her book, which has a working title of "Killing the Flame: Sergio Vieira de Mello and the United Nations He Tried to Save." The U.N. High Commissioner for Human Rights, Vieira de Mello was killed August 19, 2003 in the bombing of the U.N. headquarters in Baghdad. Power says her new work is "ultimately a book about what's right and wrong with the U.N.," which she calls an "institution on the brink." But, she says, in many ways the United Nations is nothing more than a building.

[Download Audio: "Holbrooke's Analogy" - 115kb] "Richard Holbrooke [former U.S. representative to the United Nations] likes to say about the U.N. that blaming the U.N. for Rwanda, for instance, is like blaming Madison Square Garden when the Knicks play badly," Power said to chuckles from the audience. "You know, it's really important to remember.  And what does he mean? It means that it's a building where states come in to... to be states." For the diplomats, "Understanding that we will not be safe until other people are safe ultimately, until other people are living with security and dignity; getting from there to

programs that grow out of that is another issue. But having states come into the U.N. with a greater appreciation for the long term [beyond] the election cycle; for curbing corruption, rather than just gratifying contractors; for actually building a stronger U.N., a stronger set of laws that bind those same states" would create a powerful body that is an advocate for positive change in the world," she says.

Change is in store for Samantha Power, whose DePauw appearance was supported by The Gertrude and G.D. Crain Jr. Lecture Series. She is taking a year-long leave from Harvard to serve as a foreign policy adviser to Illinois' junior senator, Barack Obama. Power says she plans to

[Download Audio: "Public Diplomacy" - 212kb] "think through the arc of nation-building -- from prevention to treatment -- it's sort of like a medical arc, and think about also how America can recover some of what it's lost in terms of, you know, when you have 70% of people in Jordan -- a relatively friendly Arab ally -- believing that George Bush is a greater threat to world peace than Osama bin Laden, you've got some work to do in terms of public diplomacy."

and former chairman of the Federal Reserve (who spoke last night) is honorary co-chair of the event along with civil rights legend and former president adviser, Vernon E. Jordan Jr. '57 (who speaks Saturday morning). Later this evening, you're invited to enjoy "An Evening with Thomas Jefferson, featuring Clay S. Jenkinson, humanities scholar, author and award-winning historical impersonator. Learn more, and access a complete schedule of events and biographies of the guests, at the event's official Web site.