From the White House to the Bahamas, DePauw Students Experience the World Over Winter Term 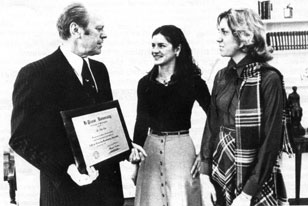 January 30, 1976, Greencastle, Ind. - DePauw University's sixth Winter Term is winding down and the 950 students who spent a month in off-campus internships return to Greencastle with experiences and stories they'll carry for years. Among them -- junior history major Lesley Anne Gorog and Julie Ann Zellers, a sophomore majoring in broadcast communications. They spent Winter Term as interns in the White House Office of Communication, and took the opportunity to present President Gerald R. Ford with a plaque from DePauw.

U.S. Senators Inouye, Buckley and Bayh, plus Congressmen from Missouri, Georgia, Illinois, Indiana and Virginia took on DePauw students as interns. Two students enhanced their interest in anthropology as interns at the the Smithsonian Institution, while another assisted the curator of the Film Study Center at New York's Museum of Modern Art.

John Polonchek, a sophomore from Attleboro, Massachusetts, spent the month in Foxboro tackling the business side of the National Football League's New England Patriots. Gene Soule, a freshman from Indianapolis, studied the financial aspects of the Indianapolis 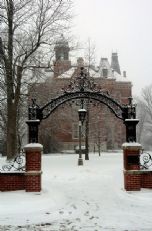 Symphony Orchestra. Nancy Emmert, a sophomore from Birmingham, Mississippi, was in Michigan this month looking at applications of horticulture as therapy for mental patients.

DePauw students also engaged in group projects. More than 50 studied the fine arts in New York City, 25 flew to London on a cultural tour. Fifteen undergraduates spent nearly three weeks sharing a multicultural experience in the Caribbean, while 10 others engaged in coral reef research in the Bahamas.

DePauw's Winter Term program is designed to give students new experiences and perspectives that go beyond their campus experiences and offer new understandings of career options and life paths.