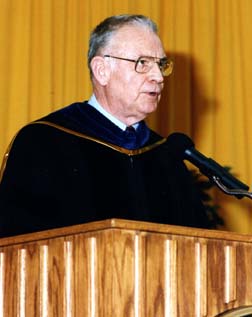 May 23, 1998, Greencastle, Ind. - "Already you have learned of the days that are no more and how quickly life moves on," United States Congressman Lee Hamilton '52 told DePauw University's graduating Class of 1998 today. "I cannot believe that it was 46 years ago that I received my degree from DePauw University," Rep. Hamilton told the 540 graduating seniors. "You sit only a few feet from me, but almost half a century separates us. I remember a world I have known; you hope for a world you will change." 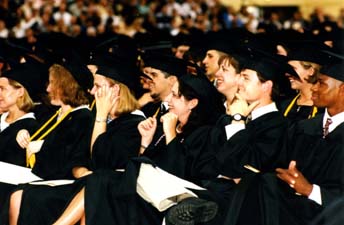 Hamilton, who has served 33 years in Congress, is retiring at the end of this term. Today, he was presented with the Old Gold Medal, the highest honor given for exemplary and meritorious service to DePauw. (image is below left) 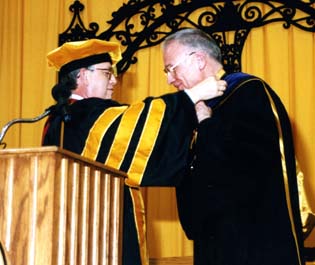 Speaking of the future, Hamilton stated, "Its greatest attraction is the sheer challenge of it, struggling to find solutions to the great issues of the day. In this enterprise there is room for you, for your intelligence, your innovation, your idealism. Victories come hard and they come slow. In that, public service can be frustrating. Hard-won gains can erode or slip away, but when they come your rewards will be without comparison."

Lee Hamilton also provided the commencement address at DePauw in 1971. Learn more in this previous story.