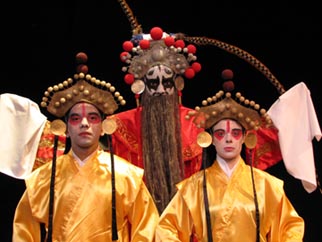 October 27, 2006, Greencastle, Ind. - In celebration of "ArtsFest 2006: Art & The Silk Road," DePauw Theatre will premiere the play, The Orphan of Chao, a new English translation by Sherry Mou, associate professor of Asian Studies from an adaptation of the ancient Chinese folk tale by Wang Yan. The production opens Friday, November 3 in Moore Theatre of DePauw's Performing Arts Center. Additional performances are Saturday, November 4, and Friday and Saturday, November 10 and 11. All shows begin at 7:30 p.m.

Professor Mou takes a fresh approach in her translation of the tale, but she is not unique in translating Wang Yun's ancient story of power and revenge for the stage. The first dramatization was written by Chi Chun-Hsing during the Yuan dynasty in the 13th century, a period regarded as the "golden age" of Chinese theatre. Fascinated by depictions of loyalty, self-sacrifice and other virtues in the play, the Chinese continued to restage the play for centuries to come. It was the first Chinese play to be introduced to Western audiences; capturing 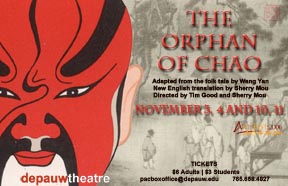 the imagination of Western philosophers and playwrights, the story spawned at least four adaptations during the 18th century including L'Orphelin de la Chine authored by French writer and philosopher, Voltaire. Adaptations continue to this day as evidenced by composer Judith Weir's 1987 adaptation, A Night at the Chinese Opera.

The Orphan of Chao is the story of an evil General, Tu-An Ku, who orders the slaughter of the entire 300-member Chao clan. Only two escape death, the sister of the ruler of the state, and her unborn son. Incensed by Tu-An Ku's ruthless political persecution and clan cleansing, several commit their lives to keeping the Orphan alive and safe until he is old enough to avenge the deaths.

In Chinese theatrical tradition it is not the story, but the style with which the story is told that enthralls audiences. Highly ambitious is the decision of director Tim Good, associate professor of communication and theatre, and assistant director Mou, to present the play in the classical Peking Opera style. Now the national opera of China, Peking Opera 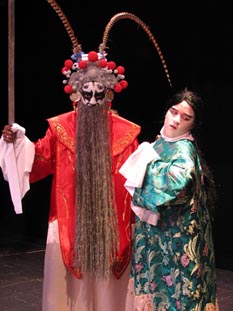 is a relatively young art in the history of Chinese Opera traditions. It is generally accepted that the style came into being in the late 18th century upon a visit to the capital by four spectacular opera troupes from a province 1,000 miles away. The troupes remained in Peking (now Beijing) borrowing from neighboring styles to create what is now China's most sophisticated dramatic theatre. Today, nearly every province of China has at least one Peking Opera troupe.

All Chinese Opera, unlike text-based Western Opera, is founded on the performing art of the actor, who must be adept at song, dance, acrobatics, martial arts, pantomime, and face painting. For a career in Peking Opera, training can begin as early as seven years old, last for more than six years, and is only the beginning of serious creative study. All learning of the style is accomplished through strict imitation and rote drill.

For many students in the DePauw cast, training began last spring as roles are primarily being created through meticulous imitation of the movement, gestures, singing and vocal intonations of a 1999 production of The Orphan of Chao at the National Opera House in Taipei, Taiwan. Formal rehearsals began early in the semester and many attend weekly Tai Chi workshops to strengthen and focus their physical gesturing. A U.S.-based Peking Opera expert, Powei Weng of Wesleyan University, is serving as artistic adviser.

In the Peking Opera style, songs are accompanied by orchestration and percussion is used to establish the tone of a scene, create sound effects, and to control both the rhythm of the play

and the actors' speech and movements. DePauw's production of The Orphan of Chao will feature Peking Opera percussionist Huang Shirong, who will work with DePauw percussionists to provide authentic live percussive accompaniment. Original recordings by the Renaissance Chinese Opera Society, Inc. of New York City will accompany songs.

The production is co-sponsored by Asian Studies and made possible by a grant from the Freeman Foundation for study in Asia, which allowed Mou and Good to travel in 2005 to Hong Kong and Taiwan to study Peking Opera. Initially, the idea was to perform only a portion of the play in the style, but a successful Chinese Theatre course offered last semester encouraged the directors to produce the entire production in the Peking Opera style.

"The production has grown from relatively modest to suddenly wildly ambitious," says an enthusiastic Good. "We are now working with guest artists and our own audacity to develop a 100 minute Peking Opera production of The Orphan of Chao."

Tickets are $3 for students and $6 for adults and available for purchase at the Performing Arts Center box office. Reservations and information may be obtained at (765) 658-4827 or pacboxoffice@depauw.edu. The production is intended for audiences of all ages.

Also available are DePauw Theatre patron passes. Purchasers are entitled to five tickets for the price of four, which may be used in any combination throughout the season. The passes are available for both students and adults. To purchase or obtain additional information, contact the Performing Arts Center box office at the contacts listed above.