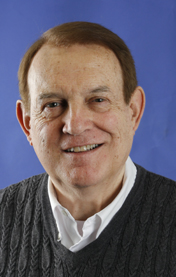 November 26, 2007, Greencastle, Ind. - J. Patrick Aikman, a 1957 graduate of DePauw University, will be among fifteeen men who are 2008 inductees into the Indiana Basketball Hall of Fame. The Indianapolis Star reports today that Aikman "was picked as winner of the St. Vincent Silver Medal and will be inducted for his contributions to basketball in a role other than as a high school player or coach."

Jim Callane (pictured at right), a 1964 graduate of DePauw, is also among the Hall's new members. He played three years at Rushville High School, and the basketball teams compiled a 60-17 record. At DePauw, he was a two-year letterman in basketball. He later coached high school hoops for 18 years and served as an athletic director. Callane is a member of DePauw's Athletic Hall of

The induction banquet will take place March 19 in Indianapolis.

The newspaper's text notes, "Aikman served as game director for the Indianapolis Star Indiana All-Star program for 20 years, retiring from that role after Indiana’s double-sweep over Kentucky earlier this year. He previously was public relations director at DePauw University, his alma mater, for 12 years."

Read the complete text at the Star's Web site along with a complete list of 2008 inductees.

Pat Aikman is also an honorary member of the DePauw Athletic Hall of Fame. Learn more in this previous story.