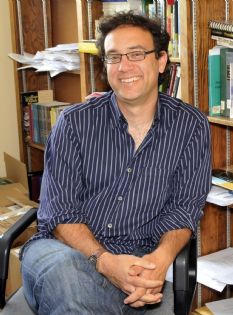 September 9, 2008, Greencastle, Ind. - David Alvarez, assistant professor of English at DePauw University, will spend the Spring 2009 semester lecturing in India as a Fulbright Scholar at the University of Delhi. Dr. Alvarez joins approximately 800 other U.S. faculty members and professionals who will travel abroad this academic year through the Fulbright Scholar Program, including Michele T. Villinski, James W. Emison III Director of the Robert C. McDermond Center for Management and Entrepreneurship and associate professor of economics and management at DePauw University, who is teaching environmental and natural resource economics and policy at Universitas Surabaya (UBAYA) in Surabaya, Indonesia.

"I'm honored to have been selected to receive a Fulbright Award," says Professor Alvarez. "The experiences that I will have in the spring will provide invaluable opportunities for my teaching, research, and professional development."

At DePauw, Alvarez teaches a variety of courses on literature of the European Enlightenment, with emphases on the rise of religious toleration and on orientalism during this period. He is also currently 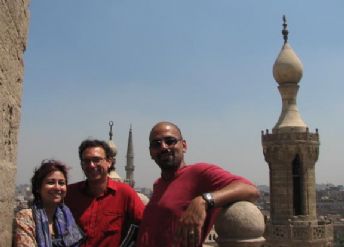 writing a book, The Aesthetics of Tolerance in the English Enlightenment, which examines how late seventeenth- and early eighteenth-century English literature contributes to the development of religious toleration.

(above right: a photo from a summer Andrew W. Mellon Foundation project that Alvarez led to Delhi, Cairo and Istanbul, to interview scholars and public intellectuals about the reception of the European Enlightenment in the intellectual and political traditions of these places. The trip included 8 faculty members from DePauw, Denison, and Vassar to Delhi, Cairo, and Istanbul; pictured are: Mona Bhan, assistant professor of anthropology at DePauw; Alvarez; and Zachary Mampilly, assistant professor of political science, Vassar College)

"Haunted by the sectarian violence and social chaos of the English Civil War, this period lays the foundation for religious toleration in today's liberal societies, but while its legal and philosophical history has received considerable scholarly analysis, scant attention 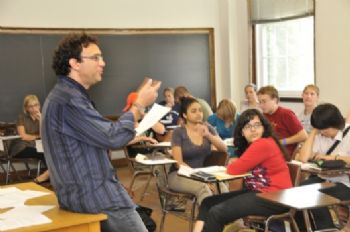 has been given to the social and discursive practices that fostered religious toleration," Alvarez says. "I am proposing lecture courses on these topics (and others that might be of use to my host institution) while in residence as a Fulbright Scholar in the English department at the University of Delhi, India."

The professor adds, "I will be grateful to have my ideas subjected to the criticism of students and faculty interested in similar questions but from a different background. Teaching in India at the University of Delhi would provide me with a unique opportunity to think with others outside the U.S. about how the shift from religious to secular forms of community occurred in England. I am very much hoping that such exchange will allow me to see more clearly the specific cultural determinants of the rise of religious toleration in England and liberal societies more generally. It is precisely this opportunity to view one's ideas more critically -- to shed one's skin and take a look at a claim from the perspective of another culture -- that I am hoping to experience."

Alvarez says he was partly inspired to apply 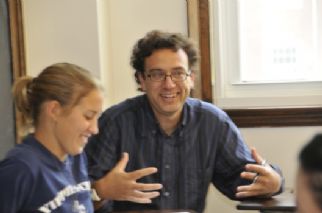 for the award because of DePauw's emphasis on internationalization as well as its encouragement to apply for grants like the Fulbright. "We have had so many undergraduates receive Fulbrights that I thought I should try to get in on the action," the professor says. "I'm happy it has all worked out."

David Alvarez is the seventh member of the DePauw community to receive an award for this academic year through the Fulbright application process. In addtion to Professor Villinski's aforementioned project, Tiffany Hodge, a research assistant and third year doctoral candidate at Emory University and 2002 graduate of DePauw University, will travel to Bangladesh conduct research in Islamic studies. Seth C. Elder, a May 2008 graduate, will study and conduct research in Macedonia, while fellow 2008 graduate Eric M. Reese will spend a year in South Korea teaching English to young people. Elin P. Raun, a 2004 alumna of the University, will travel to Estonia for a research project, "The Return of Estonia's Diaspora." Kathryn A. Haklin, a 2008 graduate of the University, will spend the coming academic year on a teaching assistantship in France as a result of receiving an international graduate study and research grant from the French government and the Institute of International Education (IIE).

Since its beginnings, the Fulbright Program has enabled thousands of individuals to study, teach or conduct research abroad, and thousands of their counterparts have engaged in similar activities in the United States. Recipients of Fulbright Scholar awards are selected on the basis of academic or professional achievement and because they have demonstrated extraordinary leadership potential in their fields.

Established in 1946 under legislation introduced by the late Senator J. William Fulbright of Arkansas, the Fulbright Scholar program's purpose is to build mutual understanding between the people of the United States and other countries. The Council for International Exchange of Scholars (CIES), under a cooperative agreement with the United States Department of State, administers the Fulbright Scholar Program for faculty and professionals. 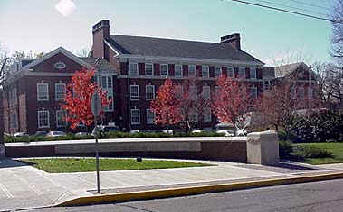