September 8, 2009, Greencastle, Ind. — Leighann R. Daihl, a 2004 graduate of DePauw University, is spending this academic year studying in the Netherlands as result of receiving an international graduate study and research grant through the 2009-10 Fulbright U.S. Student Program competition. Fulbright student grants aim to increase mutual understanding among nations through educational and cultural exchange while serving as a catalyst for long-term leadership development.

Daihl becomes the seventh member of the DePauw community to receive an award through the Fulbright application process since spring. Anne M. Schaufele, a 2007 graduate of the University, is conducting research in El Salvador. Four May 2009 graduates of the University also received Fulbright grants: Jessica V. Strong, is performing  research in Germany on "The Effects of Music on Individuals with Dementia and Depression." Ross A. Robinson is in Germany teaching English to young people. Lauren A. Wendling is in South Korea through an English Teaching Assistantship. Todd J. Schmid will spend a year conducting research in Paraguay as a result of receiving an international graduate study and research grant. Rebecca L. Upton, associate professor of sociology and anthropology and director of conflict studies at DePauw, is conducting research at the HIV/AIDS Centre at the University of Botswana in Gaborone, Botswana.

Leighann Daihl earned a Bachelor of Music degree in music performance (flute). During her stay in Netherlands, she will be studying baroque flute at the Royal Conservatory of the Hague in the Netherlands with Wilbert Hazelzet. She will also be examining original manuscripts in many libraries throughout the country, trying to draw conclusions on how the standard Baroque repertoire came 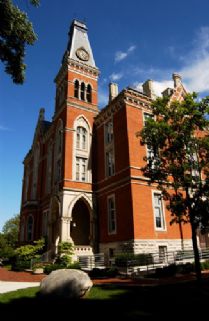 to be and why so many pieces are left out.

"There were thousands of pieces written for flute in the 18th century and only a small percentage are commonly known," Daihl notes.