July 13, 2010, Greencastle, Ind. — One of America's oldest college football rivalries, and perhaps the closest -- the annual battle for the Monon Bell between DePauw University and Wabash College -- will again be seen nationally on HDNet. The two institutions and the national high definition television network have agreed on a new three-year contract which calls for HDNet to broadcast the November 13, 2010 contest from Wabash's Hollett Little Giant Stadium as well as the 2011 and 2012 games.

HDNet has televised the last four Wabash-DePauw contests (2006-09) and also covered the 2003 game.

The rivalry began in 1890. By virtue of Wabash's 32-19 triumph in last November's matchup, the Little Giants have a slim one game advantage in the all-time series, 54-53-9. DePauw leads in games played since the Monon Bell was introduced in 1932 as the winners' prize by a 37-35-6 count.

"Rivalries don't get any closer than this, especially after 116 games, and the Monon Bell is a truly special event," says Mark Cuban, president and co-founder of HDNet. "I'm thrilled that we're able to continue our partnership with DePauw and Wabash, and ensure continuity for our viewers and keep a great college football rivalry on the HDNet 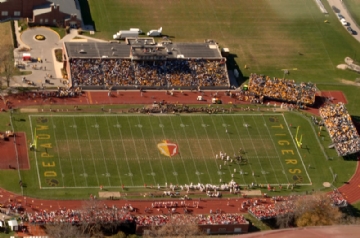 "I can't say enough about the quality of the work Darrell Ewalt (executive producer of sports for HDNet) and his team do year after year," adds Ken Owen '82, executive director of media relations at DePauw. "This is great news for the alumni who gather at telecast parties in more than 60 cities, the thousands of alumni who tune the game in at home and for the rivalry itself.  Each November, HDNet exposes many new people across the nation to our two fine colleges and this great tradition."

Says Jim Amidon, director of public affairs at Wabash, "We are thrilled that we have in place another three-year deal with HDNet, which will allow the entire nation to witness what those of us from Wabash and DePauw have long known -- that the Monon Bell Classic is the finest rivalry game in all of sports. We're especially grateful to our HDNet partners, who have recognized the greatness of the rivalry and helped us celebrate it."

Nearly 2,000 enthusiastic alumni and friends attended a record 66 Monon Bell telecast parties across the nation in November 2009. Plans are in the works for this year's parties, and hosts are needed in some cities. For details, click here or contact Dana Coffin Moell ’95, assistant director of alumni relations, at (877) 658-2586 or danamoell@depauw.edu. 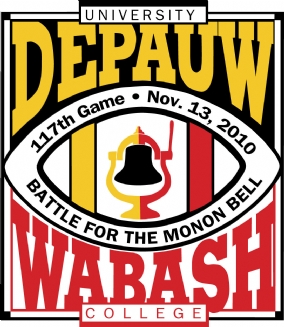 The Monon Bell was voted Indiana's best college sports rivalry by fans of ESPN, and is noted in the DVD collection, ESPNU Honor Roll: The Best of College Football, as one of the nation's best annual clashes. Past games have been televised on ESPN2 and ABC, and the Monon Bell was featured on CBS' Sunday Morning and has twice been spotlighted in Sports Illustrated. The annual DePauw-Wabash clash is also detailed in Rites of Autumn: The Story of College Football, a book by Richard Whittingham.