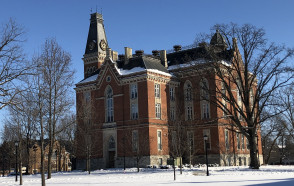 “The liberal arts education we received at DePauw has been a foundation for us throughout our lives,” the anonymous donors said. “Supporting the Rector Scholarship is a way to help provide a similar educational opportunity for future generations and to express our gratitude for that education.”

Their future gift brings the total Rector Scholar Centennial Initiative cash and deferred estate commitments to $9.5 million -- moving closer to the goal of $14 million in new commitments, which eventually will increase the Rector Scholarship Endowment to $40 million. Average annual income of about 5 percent is drawn from the endowment and used to provide student scholarships for academic high-achievers.

Edward and Lucy Rowland Rector’s gift in 1919, creating the University's preeminent merit award, is one of the most influential acts of philanthropy in DePauw’s history. The Rectors described their gifts as “investments in humanity, in the men and women who are to carry on the work of our country and the world when you and I are gone.” Since its first awards a century ago, the scholarship has produced more than 4,000 DePauw graduates, many of whom are recognized among the university’s most distinguished alumni. Rector Scholars include former U.S. Rep. Lee Hamilton ’52, Nobel Prize-winning scientist Ferid Murad ’58, astronaut Joe Allen ’59, pharmaceutical executive Phyllis Ferrell ’94 and entrepreneur Angie Hicks ’95, among many others.