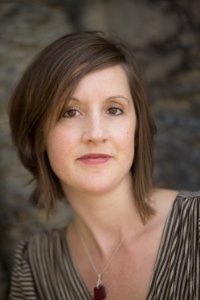 Sarah Gerkensmeyer, a 2001 graduate of DePauw University, is the winner of the 2016 Eugene and Marilyn Glick Indiana Authors Award for "Emerging Author." The award and its $5,000 prize goes to a writer who has published no more than two books during his or her lifetime.  Gerkensmeyer was announced as the recipient of the honor at a ceremony in Indianapolis last night.

An English (writing) major and Media Fellow at DePauw, Sarah E. Gerkensmeyer went on to graduate from Cornell University's M.F.A. program.  Her first story collection What You Are Now Enjoying, won the Autumn House Press Fiction Prize, was longlisted for the 2013 Frank O'Connor International Short Story Award, and was selected as Late Night Library’s Debut-litzer Prize.

Gerkensmeyer's stories and poetry have appeared in American Short Fiction, Guernica, The Massachusetts Review, Hayden's Ferry Review, B O D Y, Hobart, and Cream City Review, among others. She has been nominated for the Pushcart Prize for both fiction and poetry and was a finalist for the Katherine Anne Porter Prize in Short Fiction and the Italo Calvino Prize for Fabulist Fiction. 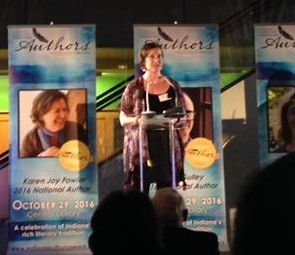 The Eugene & Marilyn Glick Indiana Authors Award is a program of the Indianapolis Public Library Foundation and is funded through the generosity of the Glick Fund, a fund of Central Indiana Community Foundation.

Sarah Gerkensmeyer presented a reading at DePauw in March as part of the University's Kelly Writers Series. Learn more in this previous story.